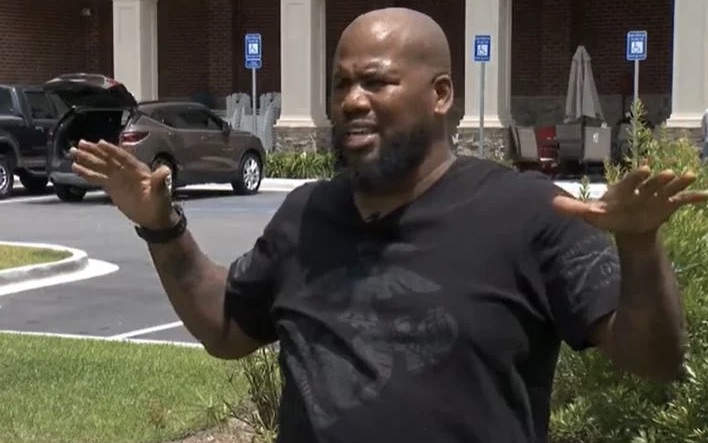 Damian Austin is being hailed as a hero by residents in Savannah, Georgia, after the armed Marine veteran detained a man accused of raping a woman inside of a Kroger’s bathroom.

Surveillance footage showed the moment Austin took down 25-year-old Gregory Hathorne after he heard a woman scream inside of the Kroger store’s bathroom, KFOR reports. “It made the hairs stand up on the back of my neck because it wasn’t a normal yell,” Austin recalled.

The scream caused commotion among the customers where one woman told Austin what occurred.

“A lady behind me just said ‘he raped that girl in the bathroom,’ and once she said that there was nothing else for me to do besides go out the door after him,” Austin said.

The Marine was armed at the time and chased Hathorne through the parking lot. He got to him in the back of a nearby Ace Hardware store. “I told him to put his hands in the air. He complied and put them up,” Austin said of the detainment. “I told him to get on the ground, and he tried to say something, and I said: ‘Don’t say a word.’”

The detainment turned into a community effort with another woman coming to assist Austin in keeping the suspect in sight until the authorities arrived. “She went inside the store. A minute later she came out with a pack of large zip ties, and so she pulled out a couple and walked over there,” said Austin. “I kept drawing on him and making sure he didn’t move,” he added.

Officers eventually came and took Hathorne into custody, EUR Web reports. The Kroger store manager gave Austin a gift card for the good deed. But he wasn’t looking for any accolades. He was just happy to help keep his community safe.

Austin shared his connection to the store and what prompted him to intervene. ‘My wife shops here, I have friends whose wives shop here, my son works here. So it was just about not letting this person get away after he did what he did,” he said.

He sent his prayers to the victim and spoke of the support she should be receiving following the attack. “I just hope this doesn’t dictate her life from this point on,” said Austin. “There are people who still care, and they’ll act in time of need.”