Maurice Tyson Talks About His Role on 'Luke Cage' 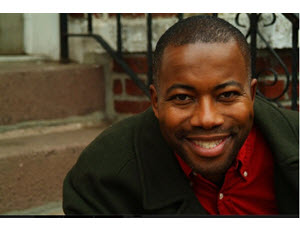 New York-based actor Maurice Tyson is a longtime comic book fan, who has just landed a spot on the new Netflix series, Luke Cage. He was thrilled when his agent called him about appearing on the new Marvel show.

Tyson appears in the twelfth episode, “Soliloquy of Chaos,” where Harlem residents come to show support for Cage after he is arrested. The scene was a “musical sequence involving Method Man and this song called ‘Bulletproof Love.’ The scene was [about] showing support for Luke Cage, on accountÂ of his reputation being challenged by law enforcement and by everyone in Harlem,â€ Tyson says.

In the scene, Tyson is shown hugging someone while wearing a bullet hole-riddled hoodie.

“I was wearing a hoodie, and weÂ were kind of in the Washington Heights area. We are basically coming through somewhere on West 70th Street, and the thing that was cool about that was, on Washington Avenue and St. Nicholas, a car was slowly rolling past us,â€ he explains. “A number of people [were] on the street showing support for Luke Cage, with bullet holes in [our] hoodies. [It was] a salute to Luke Cage; the entire community behind this superhero. The lyrics [of] Method Man talkÂ about Trayvon Martin [and] Black Lives Matter, but in a very distinct and decisive way–without showing any kind of riff between NYPD or anybody,â€ Tyson says.

A longtime Marvel comic book collector, Tyson was into Marvel before it went mainstream. “Before anybody actually put this into the context of a corporate structure for pop culture, I was there for Marvel comics. I loved the standards;Â The AvengersÂ [and]Â Captain American.Â The Hulk:Â Issue 181 was the real game changer, because that was the first appearance of Wolverine,” he says.

Tyson, who is the half-brother of legendary actress Cicely Tyson, had dealings with Marvel way before his Luke Cage stint. While still in high school, he submitted an 8mm animated short about Spider-Man for a competition for the Academy Awards and went to Marvels’ offices to ask for permission to use Spider-Man in his film.

“I met Roy Thomas [former editor-in-chief of Marvel] and Len Wein, who created Wolverine. I told them about what I was planning to do, and [I] wanted to get their permission. They were fine with that. They were so cool,â€ he says.

Tyson is set to release his latest project an animated series called, The Jenna Bender Show. “It’s a combination of The Wendy Williams Show and 30 Rock,â€ Tyson explains.

Yet, he is ready for a call back to appear on Luke Cage, a superhero he has aÂ special affinity for. “Not that he [Luke Cage] was the first black superhero, but for me, he was the first that came straight from the hood. I remember one time, Doctor Doom owed him money, so he went all the way to get his money. That’s about as ghetto as it gets!â€