Mayweather or Pacquiao? Celebrities Weigh In 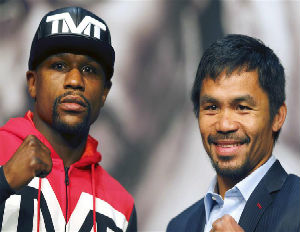 Just a little over a day away, the anticipation for what’s being called ‘the fight of the century’ is overflowing. The numbers are being run again and again in Vegas and the bets are being placed.

Mike Tyson: The Hall of Fame boxing great and former undisputed heavyweight champion of the world minced no words when asked about his pick for the fight. “I think it’s gonna be a knockout,â€ he said. “I don’t think it’s gonna go the distance.â€ Tyson said in response to inflammatory comments that Mayweather made comparing himself to, and then claiming to be better than Muhammad Ali. In a recent interview with BBC, Tyson further clarified his comments – “I just like Manny. Not necessarily because he throws a lot of punches but because he’s very elusive and might be hard to hit.â€

Oscar De La Hoya: In a somewhat telling interview with the LA Times, the ‘Golden Boy’ goes into gritty details about his previous fights with both Mayweather and Pacquiao before telling his pick to win. “The smart money is on Mayweather. Look, it’s Las Vegas, Mayweather’s hometown. His picture’s on the side of the MGM. The close rounds are going to go to Mayweather. It’s big business. It’s no secret.â€

Adriana Lima: Did you know Adriana was a fighter as well? The Victoria’s Secret model has previously trained with Manny Pacquiao so it’s no surprise where her allegiance lies. Speaking with TIME Magazine, she reiterated, “I’m a big Pacquiao fan and boxing fan, obviously.â€

Pusha T: Sums it up for XXL – “Stop it. Don’t you dare. [Laughs] Mayweather, no doubt about it. The greatest ever, ever. The greatest who ever did it.â€

Others have chosen to let their actions speak louder than their words, and here are some of the best:

Steph Curry signs a jersey for Manny Pacquiao. Shoutout and Thanks to @kicknitcoseezy @tradezby

I had a great meeting with the $66.9 billion dollar man, Mr. Warren Buffett. We talked about how we could turn a $100 million of my assets to $1 billion. Mr. Warren Buffett is the original founder of The Money Team, he's just one of my billionaire buddies. www.themoneyteam.com

I'm still going with @FloydMayweather for the win. Overall just hoping for a great fight for boxing fans without controversy! #MayPac

Mayweather and Pacquiao step into the ring tomorrow night — if you don’t have tickets already, order your pay-per-view now.