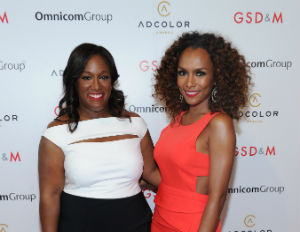 The evening kicked off with some of the best and brightest in the industry taking over the red carpet–Head of Global Marketing at Beats Music Bozoma Saint John, Singer Justine Skye, Michele Thornton, SVP of BET Networks, Actor Laz Alonso, to name a few. Guest sipped signature cocktails and mingled before the awards dinner hosted by Transgender Rights Activist Janet Mock. Then MC Lyte slayed the after party ending the night playing a variety of R&B musical hits.

Here’s a snapshot of the awards distributed throughout the night:
Rising Star Awards
A Rising Star is an up-and-coming young gun with less than seven years of experience. A Rising Star is someone who stands out among their peers as someone who is raising the bar of excellence as they move forward in their career.
Winner: Justin Adu, Creative Lead, Open Channels Group PR

Catalysts – This is presented to an individual who uses his or her platform to serve as the voice of a cause or community — educating and inspiring current and future generations of advertising, marketing, media, PR and entertainment professionals. Each one’s provocative courage, professional brilliance, and selfless community outreach have sparked change and propelled progress within their respective industries and the world. The Catalysts are chosen by the ADCOLOR Board of Directors and recipients will be announced at ADCOLOR Live!
Honorees – MC Lyte, legendary lyricist, DJ, actress, entertainer and icon
Maurice Marable, Founder and Creative Director, Brim+Brew

Visit adcolor.com to review the full list of awards and honorees. In case you missed the event, check out the Storify recap: