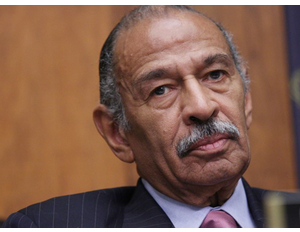 Rep. John Conyers is seen during a hearing on immigration issues on Thursday, Jan. 17, 2008 on Capitol Hill in Washington. (LaurenVictoria Burke/wdcpix.com)

Georgetown University recently apologized for owning and selling 272 slaves and introduced new measures to grant preferential admissions treatment to descendants. This historic move has rekindled the national debate about slave reparations and drawn widespread attention from the global community. Â

Slavery was the engine of the American economy during the 18th and 19th centuries. Slave labor produced the consumer goods that dominated world trade.

According to scholars at the Gilder Lehrman Institute of American History, “By 1840, the South grew 60% of the world’s cotton and provided some 70% of the cotton consumed by the British textile industry.Â Thus, slavery paid for a substantial share of the capital, iron, and manufactured goods that laid the basis for American economic growth.â€

The estimated value of U.S. slave labor ranges from $5.9 to $14.2 trillion dollars, according to Thomas Creamer, associate professor of public policy at the University of Connecticut. This estimate is based on calculations of the number of hours worked by all slaves, from the moment of national independence in 1776 until the issuance of the Emancipation Proclamation in 1865.

More specifically, Creamer estimated the value of slave labor by multiplying the amount of time slaves worked by the average wage price at the time, and then tacked on a compounding interest rate of 3% per year. The estimated range is offered in lieu of a fixed figureÂ because the exact number of hours worked by slaves is unknown.

On the topic of slave reparations, the American public is deeply divided along racial lines. According to a poll conducted earlier this year, the vast majority (81%) of white Americans oppose reparations for African American descendants of slaves. Conversely, 68% of black Americans support reparations. Â

And yet, the global community, broadly, and the United Nations Working Group of Experts on People of African Descent, specifically, is closely monitoring the debate. The working group has called on the U.S. government to consider reparations to descendants of slaves.

“The colonial history, the legacy of enslavement, racial subordination and segregation, racial terrorism, and racial inequality in the U.S. remains a serious challenge, as there has been no real commitment to reparations and to truth and reconciliation for people of African descent,â€ according to a reportÂ from the working group.

John Conyers Jr., aÂ U.S. representative for Michigan’s 13th congressional district, has answered the call for slave reparations for the past 25 years. Conyers was 59 when he first introduced H.R.40, the commission to study reparation proposals for the African Americans Act. The goal of the bill was to “acknowledge the fundamental injustice, cruelty, brutality, and inhumanity of slavery in the United States and in the 13 American colonies, between 1619 and 1865, and to establish a commission to examine the institution of slavery.â€

He is now 85 and has reintroduced the bill perpetually to each congressional delegation, including theÂ 114thÂ in January 2015, to no avail. The bill has a 3% chance of getting past committee and a 1% chance of being enacted, according to a prognosis from GovTrack.us.