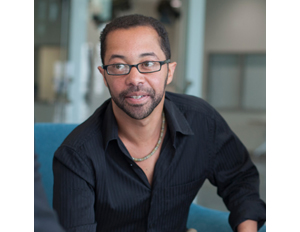 Lindsay Grace is an expert on games. He is a game developer; he teaches game development at American University; and is founding director of the Game Lab and Studio at the university.

Grace is also a programmer and artist.

He does not just teach and make any games, though. He designs games with the purpose of having social impact.

“Most of what I do is around social impact gaming–persuasive play. [It’s] game design to change people’s interests, activities, opinions, [and provide] new perspectives,â€ says Grace.

One such game Grace designed addresses prejudice. The game is called Black Like Me.

The game involves matching tiles by color, but the player is deliberately provided a limited color selection.

“If you discriminate by color, you can’t win the game,â€ he explains.

Another one of Grace’s games is Big Huggin’, the first affection game of its kind.Â  Players hug a 30-inch teddy bear to get through obstacles on the screen. It is a counter to many of the violent games on the market.

Grace has developed and released over 20 games. He has an M.S. degree in computer information systems from Northwestern University, and an M.F.A. in electronic visualization from the University of Illinois at Chicago School of Art and Design.

As founding director of the American University Game Lab and Studio, Grace oversees over $450,000 in federal contracts for game development. They are working on a project that takes the engagement principals of game design and applies them to the consumption and the production of news.

The Game Lab and Studio has recently released a game solution for the clinical treatment of anxiety for the National Institute of Mental Health.

He is also focused on the underrepresentation of minority developers in the gaming industry. Grace has participated in a number of diversity summits that have sought to increase minority participation in gaming.

Grace is also the vice president of The Global Game Jam, a non-profit that runs the largest gaming making event in the world. Over 36,000 participants across 93 countries have just a weekend to produce a digital and non-digital game.