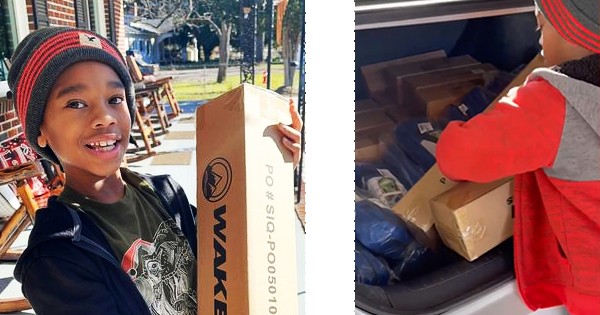 Taji Johnson, an 8-year old boy from Trenton, South Carolina, is helping homeless people in his community by providing them tents for shelter.

I just kept thinking about people who don’t have homes,” Taji told WJBF.

He started Taji’s Tents last January to raise funds to purchase tents for the homeless. His mother said that in just 10 days, they were able to garner $2,700 in donations and bought just 34 tents at first.

“He did not like the fact that Amazon charged him tax because he felt like those were extra tents he could have purchased,” his mother, Chemikia Johnson said.

Taji personally went to Columbia, the state’s capital, with his family to give out the tents. He is set to go to Greenville, Augusta, Macon, and Charleston next.

“He’s so happy to be able to provide shelter to homeless people. He really is,” said his mother.

Taji, who aspires to be president one day, doesn’t plan to stop giving out tents to the homeless.

“I asked him if this was for the long run or if this was something he wanted to do,” said his mother.

“He said he’s doing it forever. He’s going to give as many homeless people shelter as he can.”