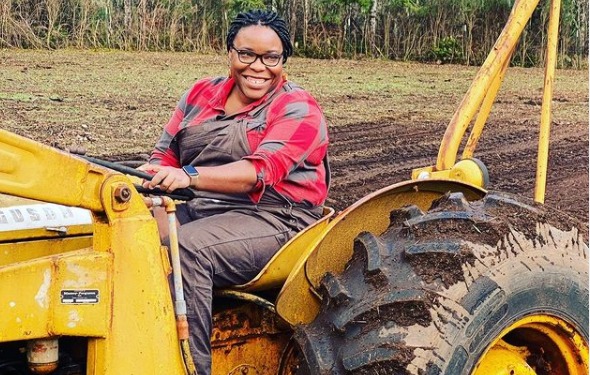 The pandemic has inspired many ventures out of the need to stay afloat financially or simply because people want to pursue their happiness during an upsetting time.

Meet Shellie-Ann Kerns, a Jamaican immigrant who decided to return to her farming roots. Her photo-rich Instagram account chronicles her daring crowfunding journey to build a Black-led farm and bread school in Washington’s Middle Satsop Valley. In one post, Kerns is seated on a tractor. In another, she holds  something leafy and green which was grown at her 20-acre homestead.

“I am an unapologetically Black woman launching a farm in western Washington. Your donations will help me buy a tractor and implements, drill a new well, build high tunnels as well as construct a commercial/demonstration kitchen for making spice blends and teaching,” she said on her GoFundMe page.

The child of Jamaican subsistence farmers mentioned that she is a committed locavore. She has kept chickens for eggs and manure, grown vegetables seasonally for her kitchen, traded with neighbors, and donated surplus eggs to the Matlock Food Bank, which is grateful to receive locally produced food, according to her GoFundMe account.

So far, Kerns has raised more than $77,000 through GoFundMe.

“Your donations will give me a much-needed boost in purchasing a compact tractor and hiring help to clear the land for large-scale planting. Funds will also be used for building high tunnels and a demonstration kitchen for preparing spice blends and imparting another of my passions- baking with sourdough,” Kerns wrote.

The Olympian reported that Kerns quit her job as an aircraft dispatcher in February, although on Instagram, Kerns mentioned that she was furloughed. Observations inspired the budding farmer to take action.

“I saw empty grocery shelves,” Kerns said to The Olympian. “Farmers were having to throw out food. The supply chain was disrupted, and I knew that the answer was having more local food available.

Kerns told AfroTech that farming comes from her mother’s side. Her father’s family has agricultural roots, too. Although Bunkhouse Acres’ website explained that Kerns left Jamaica to join her spouse in Washington State, in 2013, her heritage remains a central part of this adventure-filled story that also incorporates the issue of food insecurity.

Fresh food can also seem like a privilege to  those who cannot afford it. Kerns informed AfroTech that she applied for grants to help subsidize her produce. The socially conscious farmer hopes to be able to offer EBT, SNAP and food stamp recipients reduced produced rates to feed people who need help.

“I’m not just feeding the people in Seattle [who] have these well-paying tech jobs, but I’m feeding the people who just don’t know necessarily whether they’re going to be able to fix their car or pay their rent,” Kerns told AfroTech.