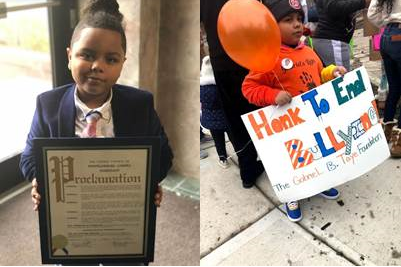 With the raising rate of child suicide and depression among young teens, it has become increasingly important to raise awareness that harassment and bullying, online and off, have on the current generation. For seven-year-old youth activist Cavanaugh Bell, the topic inspired him to take matters into his own hands.

Having dealt with bullying in the past, Bell became passionate about helping other kids like him overcome issues with bullying. Now he’s using his platform to spread his mission. The gifted activist founded the nonprofit Cool & Dope, which revolves around his life mission to eradicate bullying and youth suicide through political and social action by his 18th birthday on November 20, 2030.

While that may seem far off, it hasn’t slowed Bell from his purpose or his organization’s work. Last year he worked to get February 21 recognized as Bullying Awareness Day in Gaithersburg, MD, in honor of Gabriel Taye, a eight-year-old from Cincinnati, OH, who committed suicide due to bullying. Bell also got the month of October designated as Bullying Prevention Month in Montgomery County, MD.

Suicide rates have risen drastically across the U.S, particularly among children and young teenagers. There has been an 73% increase of suicide attempts from black youth.

Through his nonprofit, Bell has delivered over 200 “We’re Cool” bags to school counselors at five different schools in the Gaithersburg area for bullying victims and has spoken to city council members about community efforts to increase awareness. His efforts have gathered national attention, leading him to receive the Congressional Certificate of Recognition from the House of Representatives.

Bell has also become a TEDx speaker, delivering a speech at the TedX Youth Talk in North Bergen, NJ about how kids and teens can stop bullying in their communities to create change in the world.

On October 4, 2020, Cavanaugh will lead the first kid-driven Anti-Bullying Rally in D.C. at the Capitol Mall.