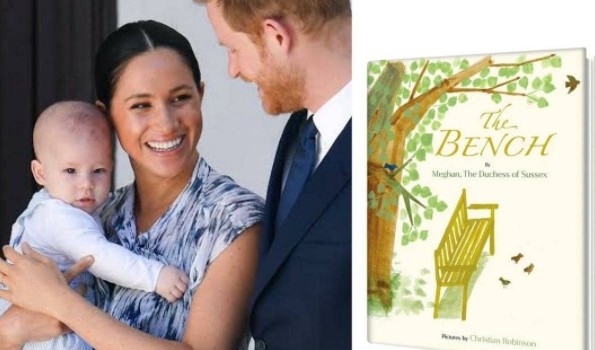 The book is already the top release in Children’s Black & African American Stories on Amazon, which describes The Bench as the special relationship between a father and son seen through a mother’s eyes. The book will be released on June 8, just before Father’s Day.

“In The Bench, Meghan, The Duchess of Sussex, touchingly captures the evolving and expanding relationship between father and son and reminds us of the many ways that love can take shape and be expressed in a modern family,” according to the description on Amazon.

A press release said that The Bench started as a poem Markle wrote for Prince Harry on Father’s Day, the month after Archie was born.

“That poem became this story,” Markle said in the press release. “Christian [Robinson, the book’s illustrator] layered in beautiful and ethereal watercolor illustrations that capture the warmth, joy, and comfort of the relationship between fathers and sons from all walks of life; this representation was particularly important to me, and Christian and I worked closely to depict this special bond through an inclusive lens. My hope is that The Bench resonates with every family, no matter the makeup, as much as it does with mine.”

During an interview with The Today Show, Robinson revealed that creativity was his way over having some say over his circumstances–his mother was in and out of prison for most of his childhood. Robinson, who explained that his grandmother was his caregiver, also remarked the pictures’ power

“They are tools used to communicate, and so I feel a responsibility to to tell stories that reflect experiences that look like mine. Experiences that aren’t often seen in picture books, and so it’s really important for me to create pictures that are empowering to as many different kids as possible,” Robinson said.

Somehow, the forthcoming book has already stirred up a controversy. Children’s book author Corrine Averiss dismissed claims that Markle’s forthcoming book closely mirrors her book, The Boy on the Bench.