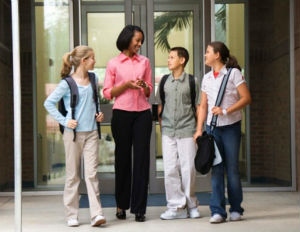 Eight-year-old Vaughn McKoy had to play baseball with the bigger kids. Because his birthday fell just days before the cutoff, he was playing with boys age 9 to 12. Yet, playing his first game on the team, the New Jersey Bank Shorties–a community team sponsored by a local bank–Vaughn drove in the only two runs of the game. Though his team lost, in that moment, the smallest Shortie on the team knew something about himself: that he was different and would have a future.

McKoy would grow up to become assistant United States attorney for the district of New Jersey. The youngest of six children who grew up without a dad in the home, McKoy experienced an inner-city, rough and tumble upbringing. But because of mentorship–a word he uses broadly to include coaches, pastors, teachers, neighbors, and others, McKoy successfully avoided the traps that snared others in his family and neighborhood. And he is determined to give back.

McKoy has had many mentors, including coaches and others who took an interest in him, but one stands out: a man he affectionately called Mr. G.

McKoy met Mr. G. while a student at Rutgers University. He had mentioned to one of his coaches that he wanted to be a lawyer–a seed planted in him by a grade school teacher who, no doubt, noticed how much young Vaughn talked in class. The coach said he knew a lawyer and would introduce him. That lawyer was Arthur Goldberg, a very successful and well-known businessman.

“We would see him in the weight room at school,â€ McKoy says. “After the coach introduced us, he told me he’d been watching me, and that I seemed like the kind of person who wouldn’t back down from anything. From that moment, we began to develop a relationship.â€

At first McKoy was skeptical: What would someone who was driven to the gym in a Lincoln Town Car by his personal chauffeur/bodyguard want with him? “I couldn’t figure out what he wanted from me. He had also taken an interest in other players before me, none of whom went into law,â€ McKoy says.

But soon Mr. G. asked McKoy to call him every Monday, providing a time for checking in and catching up. When he invited McKoy to his office for lunch–a very casually dressed McKoy ate uncomfortably while Mr. G. and his associates, in suits, talked business–Goldberg turned to the young college student and asked, “Do you know why I’m doing this for you? So you can turn around and do it for someone else.â€

McKoy was sworn in as the head of the criminal division of the attorney general’s office seven days shy of his 35th birthday.

McKoy experienced an unusual closeness with his mentor. “He accepted me as part of his family–Christmas, Father’s Day. Three people spoke at his funeral, his brother, the rabbi, and me.â€ Luminaries like Donald Trump and Don King attended Goldberg’s repast.