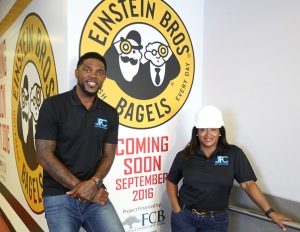 A Power Player On and Off the Court

As a Miami Heat veteran, Haslem has appeared in over 777 games during his 12-year NBA career. However, his career only shadows his business acumen. He reportedly has been an essential part of the Einstein Bros. Bagel and Starbucks acquisition process and will pivot into day-to-day operations once he transitions from his professional basketball career. JFC managing partner Hall has been a fixture in the South Florida business and political community for over 20 years, owning and operating three regional and national brands.

Of the four new franchise locations the company owns, an Einstein Bros. Bagels and Starbucks are slated to open this October on Jackson Memorial Hospital’s campus with financial partner Florida Community Bank. Two respective locations will soon follow in the new Miami Central Station, which will serve All Aboard Florida’s Brightline passengers.

Through the NBA’s player’s continued efforts to invest and help shape the future of South Florida’s economic community, JFC Miami aims to hire local unemployed job seekers, as well as young adults from low-income families to provide them an opportunity to enhance their work-readiness skills while earning an income. The four new franchise locations will create an estimated 120 new jobs.

JFC Miami has partnered with CareerSource Florida and the Employ Miami-Dade Project to assist with identifying qualified employees. The goal of JFC Miami and its partners is to provide employment opportunities for those job seekers who are often overlooked in order to help them support their families.

“Many of our new team members have been unemployed or underemployed for two or more years. Our goal moving forward to our opening is to provide comprehensive training to our new employees to include customer service training, conflict resolution in the workplace, and extensive brand training in-store,” said Haslem in a released statement.

“My partner Ramona and I, along with our incredible team at JFC Miami feel very fortunate that we can make a positive impact on our community with the opening of our Starbucks and Einstein Bros. Bagels locations,â€ he added. “With everything happening in today’s world, it ‘feels good to do good.”