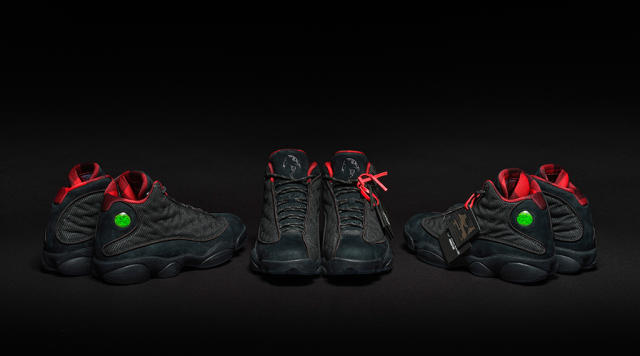 It’s 2023, a special year for arguably the NBA’s GOAT and business mogul Michael Jordan, who turned his number 23 jersey into a fashion empire that’s been dominating the sneaker market for nearly 40 years.

In honor of what will be seen as #JordanYear on social media throughout 2023, Air Jordan started its “Jordan Year” (which is also hip-hop’s 50th anniverary) with an auction for one of the 23 pairs of retro Air Jordan 13s, the brand designed to commemorate the late great rapper, The Notorious B.I.G.

On Monday, Nike. announced its partnership with the Christopher Wallace Memorial Foundation. Just 23 pairs of the exclusive Air Jordan retro honoring The Notorious B.I.G will be auctioned off at an event hosted by Sotheby’s, Sneaker News reported.

“This Air Jordan 13 has been reinterpreted to celebrate the legacy of The Notorious B.I.G., someone who reached for the stars, had the boldest of dreams, with the work ethic to back it up,” Reggie Saunders, vice president of entertainment marketing for Jordan Brand, said in a statement.

While the 23 pairs of Biggie 13’s look like the signature sneaker at first glance, a closer look shows the nods to the legendary, late lyricist throughout the sneaker design. The rapper’s silhouette can be seen on the tongue of each sneaker.

The sock-liners feature a classic red and black plaid flannel pattern that serves as a nod to Biggie’s style throughout his time dominating the hip-hop scene. There are also two sets of Biggie lyrics on the tongue tag: “It was all a dream” and “If you don’t know, now you know” from B.I.G.’s 1994’s hit, “Juicy.”

Sotheby’s online auction for the 23 pairs of Notorious B.I.G. Air Jordan 13s lasts until February 3. The special edition sneakers are estimated to sell between $2,300 and $5,200; bids start at $1.

Proceeds from the exclusive partnership will benefit the Christopher Wallace Memorial Foundation, which,  “aims to empower inner-city youth with educational learning instruments, sponsorships, grants, and community-based mentorship programs and campaigns, all in line with its motto, Think B.I.G ‘Books Instead of Guns.’”