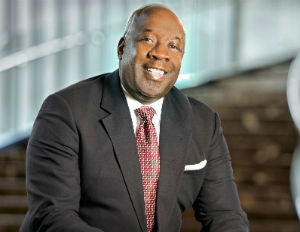 Whether for Mardi Gras, the Sugar Bowl, or simply to experience Bourbon Street, there’s something to capture your attention in New Orleans. The city’s nightlife and culture has made it ‘famous for being famous.’ You would think managing a hotel property in one of the most visited cities in the U.S. would be an easy job, right? Not quite.

Despite New Orleans being known as a major tourism hub, there is a lot of grunt and sweat that goes into running a major hotel chain — especially as one of few African American General Managers. Having been with Hyatt for 37 years, the Hyatt Regency New Orleans General Manager Michael Smith, has become a hero in New Orleans for his can-do attitude, assistance to first-responders during Katrina’s aftermath, and for becoming meticulously toiled to re-open the property.

In addition to his role at the hotel, he is a major player in the New Orleans hospitality and tourism sector, and serves on the boards of the New Orleans Museum of Art, the Audubon Institute, NOLA Business Alliance, Board of Commerce, and the city’s Hotel & Lodging Association, and was also selected to participate in Mayor Mitch Landrieu’s tri-centennial celebration of the city of New Orleans.

Smith has become a major figure in the city since its rebirth in 2005, following the devastation of Hurricane Katrina. “I was here before, during and after Katrina,â€ says Smith. “The Hyatt was ground zero during Hurricane Katrina. For the first two days of Katrina, the images showed the glass building of this hotel being blown and it was symbolic of the devastation of Hurricane Katrina. That’s what everyone say — the Hyatt blown in. Then a few days later, quite naturally when the levies broke, the photos shifted to the lower 9th ward. Those are things that can define you if you allow it to. Here we are now celebrating 10 years, and the city is doing better than ever.â€

Continues Smith, “If there’s some good that came out of that, it is the medical district and the re-development of the city, and the Hyatt is a part of that. It took us 6.5 years to re-open. We probably could have opened a bit earlier, and we could have put the hotel back to its previous condition for about $75-80 million, but we did it for $275 million. This project was an odyssey, and also a labor of love in many respects. No matter what, we weren’t going to compromise the business model. And here we are 3 years later, and the business model is spot on. ”

Over the years, the Hyatt Regency New Orleans, which is directly adjacent to the Mercedes-Benz Superdome, has been the premiere hub for celebrities, politicians, and local community pioneers, having hosted everyone from Maya Angelou to legendary restaurateur, Leah Chase. Re-opening in 2005 was a highly symbolic, yet substantive step, which was the result of a $275 million revitalization. Pre-Katrina, the city had 35,800 rooms, and with the Hyatt re-opened, that figure is now 37,159.

There is an emotional attachment to the Hyatt Regency New Orleans, not just for it’s location, but because of how committed the hotel has been in giving back to the local community. Many are unaware of the decisions Smith had to make, at the height of such a difficult time, during Hurricane Katrina. “For about 10 days [during Katrina], there was no power in the city,â€ says Michael Smith. “But, the Hyatt Regency New Orleans had power. And I would not turn on the power, because there was civil unrest outside.â€

In addition to his works within the industry, he is also a recognized philanthropist. He developed Â A Night To Make It Right by Hyatt, in partnership with Brad Pitt’s Make It Right foundation to rebuild devastated homes in the Lower Ninth Ward. The event was hosted at the hotel and became one of the city’s most spectacular and star-studded events to date, with appearances and performances by Brad Pitt, Angelina Jolie, Ellen DeGeneres, Rihanna, Seal, Kanye West, Snoop Dogg and countless others. Michael has also worked to restore the Richard & Anne Bloch Cancer Survivor Park located across from the hotel, for which he was awarded by the city’s Downtown Development District this year. He also led the 90th birthday celebration for famed creole chef, Leah Chase of Dooky Chase Restaurant, participates in Gen. HonorÃ©’s HonorÃ© Black Male Achievement Initiative program at Southern University, and was recently selected to participate in the Urban League’s Empowerment initiative.

After 30+ years with Hyatt, there’s no shortage of opportunities for Smith. But he stays loyal to the Hyatt and the New Orleans hotel. “I went back to the Hyatt in Capital Hill (when we closed for renovation), and I enjoyed the job and loved it there,â€ says Smith. “That was me, because I’m somewhat of a political pundit. But, I had become a part of the fiber in the New Orleans community. The renovation was a chance to do something different. You get to a certain part of your life, where you start to think about your legacy and how you’ll be defined. For 4.5 years I did nothing but work on this hotel — it’s unheard of. I was determined to do this. I felt that I could go to D.C., Chicago, New York, but could I have made as much of a difference as I’m making now?â€

Smith is doing just that. He’s had a hand in building the careers of some of Hyatt’s top executives. Throughout the years he’s been committed to guiding the careers of younger talent within the company. “When you get into these positions of greater responsibility, you always have to put yourself in a position to be a doorstop,â€ says the Hyatt Regency New Orleans GM. “About 80% of the African American General Managers in Hyatt have worked for me. So you can pull people in with you. That’s your responsibility to value, to appreciate and to understand the cultural diversities that we’re tasked with.â€

If you’re wondering, ‘why the Hyatt?’ Smith makes it clear. “Hyatt provides the understanding of who I am. I have equity in Hyatt, which allows me to be a bit more of a free-thinker. They’ve allowed me to do that, which other companies just don’t do.â€