For more than a decade now, we’ve watched Michelle Obama grow, stretch, and transform, becoming who she is today.

Black women, in particular, have observed her with great interest and great love. We have prayed for, cried for, and consistently rooted for her as she evolved from a deeply reluctant public figure into a global icon whose much-anticipated memoir, Becoming, is getting rock-star treatment.

We have revered and emulated her, seeing in her prominent service to our nation new possibilities for making a powerful impact of our own.

Women of color candidates increased by nearly 75% since 2012, according to a report from the Reflective Democracy Campaign. More than 400 black women ran in the midterm elections, including 19 black women in Harris County, Texas, who all won their races to become judges, and Stacey Abrams, who is still fighting to ensure that every vote is counted in her historic race to become the first black woman governor in the U.S.

Can it be mere coincidence that as Michelle Obama recounts her journey to marriage, motherhood, and the White House, becoming a richer, bolder, fuller version of her herself in the process, that generations of women who most identify with her are finding their own voices and becoming a greater force with which to reckon as well? 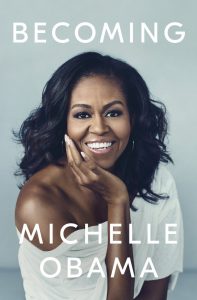 Launched halfway between Election Day and Thanksgiving, no sooner did Becoming’s Chicago tour begin than Oprah announced it as her next book club pick—as if it needed the boost. Amazon and Barnes and Noble were reporting record sales weeks before the official launch date and tickets for seats on the former first lady’s 10-city stadium tour (at as high as $2,750 apiece) were selling out fast.

Her current megastar incarnation represents quite a shift for a woman who once not only resisted the spotlight—she appeared to recoil from and even resent it. After all, pre-marriage, Michelle Robinson had always worked toward a very carefully crafted vision for her life, and while it included some ambitious and unconventional goals, becoming the first lady or a political spouse of any kind wasn’t among them.

The confident woman who leans a bare shoulder and bright-eyed smile directly into the camera on the cover of Becoming has come a long way from the guarded working mom in sensible heels who routinely declined requests for interviews and speaking opportunities during Barack’s early political life. Back then, she also refused to upend her career or her young daughters’ routines to accommodate her husband’s DC-based job demands or his larger ambitions, which she had reason to resist.

For starters, Michelle Obama had her own career aspirations, a distaste for politics, and a strong attachment to her Chicago hometown. Add to that the brazen fear that you could almost read in her watchful eyes: `What if something happens to Barack? What if my children lose their dad? What if this country doesn’t allow this historic moment to fully play out after all?’

Redefining the Role of a Lifetime

Once the Obama’s made history, there was no time for fear and no turning back. Instantly thrust onto the world stage and into a hailstorm of dizzying expectations and change, she packed up her Chicago dream house (along with her mom and her own dreams of remaining there) and took on the role of a lifetime, one she neither sought nor wanted.

Initially, there was a slight tightness to her composure and an awkwardness to her style. But soon she was an absolute natural, wowing interviewers, world leaders, and her own swelling base of fans.

Smart, self-effacing and impeccably prepared, it was her authenticity that most resonated with people—especially black women. Although she went to Princeton undergrad and Harvard Law School and had worked in well-paying jobs in white-shoe settings, she still bore the recognizable hallmarks of an unapologetic black girl deep-dipped in the instincts, values, adaptability, and resilience of Chicago’s hardworking South Side. Forget trying to hide it, she wore it like the Hope Diamond—with fist-bumping pride.

As Benilde Little wrote in The Meaning of Michelle, a 2017 anthology of essays edited by Veronica Chambers, “It’s hard being oneself under a microscope and the miracle of Michelle is that she seems to have always held on to her authentic self—with lots of her middle name, LaVaughn—holding center.”

While her popularity soared, reaching a feverish pitch toward the end of the Obama’s time in the White House, she was never without her detractors. While she honed her famous “When they go low, we go high” approach to dealing with them, in her earliest days in the spotlight, you could almost see her bracing herself for the ignorance, the disrespect, the inevitable attacks every black woman knows too well.

With trademark restraint, she addresses the issue head-on in her book’s preface this way:

Since stepping reluctantly into public life, I’ve been held up as the most powerful woman in the world and taken down as an ‘angry black woman.’ I’ve wanted to ask my detractors which part of that phrase matters to them most – is it ‘angry’ or ‘black’ or ‘woman?’

In Becoming, Michelle LaVaughn Robinson Obama finally takes back her life and tells her own story, transcending all labels and rendering all outside opinions moot.