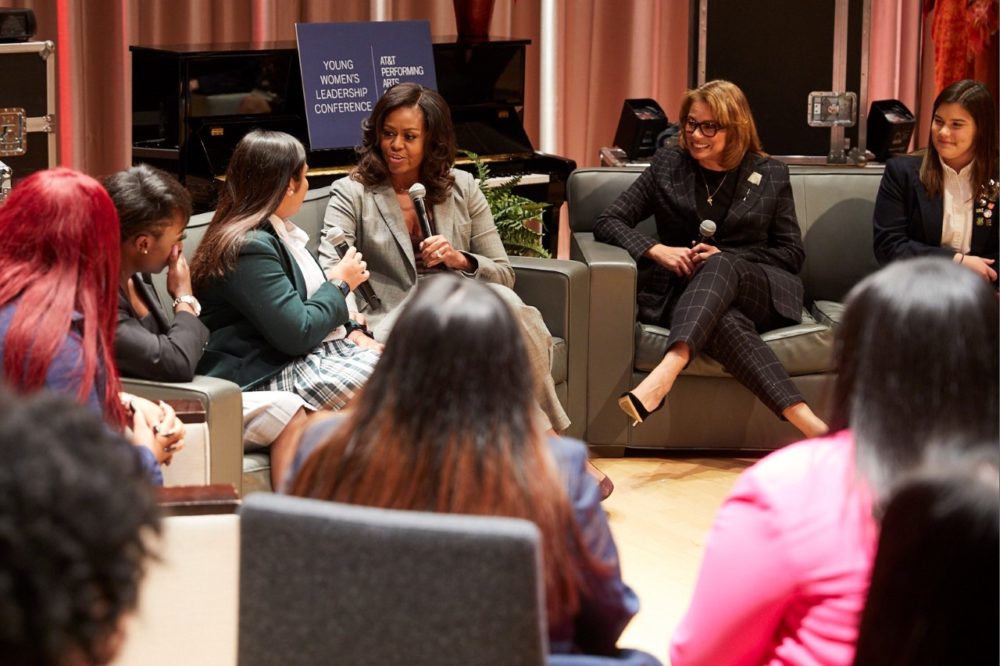 Michelle Obama, the former first lady affectionately known as #ForeverFirstLady, made a surprise appearance at a community event in Dallas, Texas, on December 17, at the Winspear Opera House to kick off the first annual Young Women’s Leadership Conference: Leadership Lessons Learned through the Arts, which hosted over 150 teenage high school girls. The young women were reading and discussing Mrs. Obama’s book, Becoming, and had no idea she would be making a live appearance.

Mid-discussion, Mrs. Obama walked into the room and not only did the young ladies scream, but you could hear some of the adults as well — this seems to be the effect Michelle has on everyone. With tears pouring down their faces, Mrs. Obama was holding her composure to instill some life lessons into these young ladies.

Mrs. Obama discussed her challenges from her youth into adulthood with many telling her what she could not do and how she vowed to prove them wrong. As discussed through previous interviews — as well as her book, Mrs. Obama states her struggle in attending Princeton and Harvard as a minority and a woman.  Although we are in 2018, women and minorities still face a unique set of obstacles in education and in their careers. Mrs. Obama not only asked questions about these challenges, but gave suggestions to overcome societal setbacks. While the takeaways were directed to the young women, we can all learn a lesson from her inspiring words.

“The subliminal messages received from society is for minorities to keep their sights low and not dream too big.”

“There will always be someone who wants to punch you in the stomach, who wants to trip you up, and make you doubt yourself. You have to practice vigorously, learning to tune out the negative and heat up the positive.” She added, “You have to learn to be resilient in this lifetime”.

“Be prepared, because so many people will try to tell you what you can’t do, and the only thing you have to fall back on is your preparation and the confidence you have to rise above.”

In addition, all of the students were surprised with tickets to attend Obama’s book tour stop later in the evening at the American Airlines Center. Her book, Becoming, became a no.1 best seller in the first week of its release.