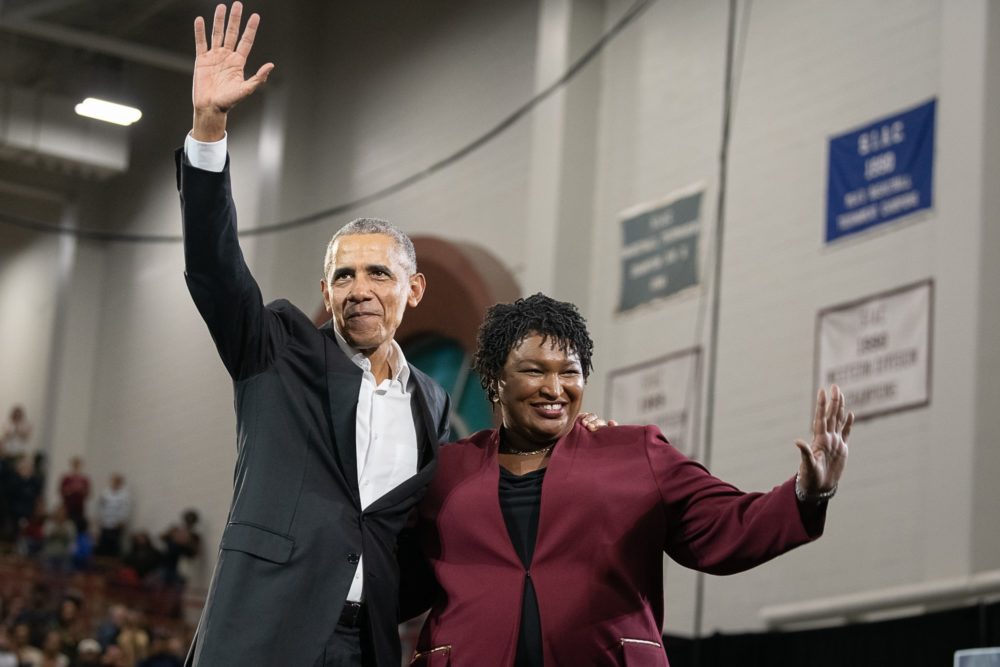 For anybody here who has an ancestor who didn’t have the right to vote and you are choosing not to vote…you are dishonoring your family. You are disrespecting and disregarding their legacy, their suffering, and their dreams. …

That powerful message represented the call to action delivered by one of the most influential figures in the world today. In a stump speech in Georgia last week—the first since she exercised her version of the bully pulpit to help galvanize millions to elect the first African American president—Winfrey emphasized why the political stakes couldn’t be higher come Tuesday while energizing voters to go to the polls in droves for a historic gubernatorial election: Democrat Stacey Abrams’ bid to become the first African American female governor in U.S. history.

The hotly contested race between Abrams, the former minority leader of the Georgia House of Representatives, and Republican Secretary of State Brian J. Kemp also denotes an election season marked by racially divisive rhetoric and unscrupulous campaign tactics. For instance, two federal courts on Friday issued rulings to stop attempts by Kemp, who oversees state registration laws in his post, from engaging in voter suppression. Now, roughly 3,000 naturalized U.S. citizens are allowed to vote in Tuesday’s elections and in addition, the state has been prevented from tossing out absentee ballots placed on hold due to Georgia’s “exact-match” law stipulating that personal information on voter applications must correspond to state databases.

Attempts to undermine Abrams support, however, did not end there. CNN reported Georgia voters have received racist robocalls attacking both Abrams, and Winfrey. According to the report, The Road To Power, the neo-Nazi organization behind the robocalls, is the same group that targeted Andrew Gillum after he won the Democratic Florida gubernatorial nomination in August and again in October. The Tallahassee Mayor is also fighting a contentious battle against Republican Ron DeSantis to achieve the milestone of being the first African American to capture the statehouse in the Sunshine State.

Those incidences represent the mirror of the 2018 midterms, the battle to neutralize President Donald Trump, whose xenophobic nationalism, ultra-conservative policies, and confirmed series of untruths continue to tear the nation apart across racial, political, and ideological lines. The elections on Tuesday, which will determine partisan control of 36 statehouses, the U.S. Senate, and Congress, is clearly a referendum on the Trump presidency and a prelude to the 2020 race for the Oval Office.

Historically, the opposing party regains at least one chamber of Congress in the elections after a sitting president’s first two years in office —remember the “shellacking” at the polls in 2010 during the disastrous performance of Democrats when President Barack Obama was in office. During this election cycle, the Democrats and an array of progressive organizations are taking nothing for granted—and justifiably so. Spending months pushing voter registration and a message of resistance among traditional and prospective constituencies like African Americans, Latinos, women, millennials, and disaffected Republicans, progressives seek to counter Trump’s missives that have stoked fear, hate, and violence. On the campaign trail in which he cited “even though I’m not running, I’m still running,” Trump has touted a relatively strong economy and, at the same time, double-downed on his usual, incendiary language and tweets, from his depiction of the migrant caravan as “an invasion” to his characterization of candidates like Gillum as “a stone-cold thief.”

Now as the focus shifts to no-holds-barred “get out the vote” campaigns, the Democrats have brought out the big guns. In addition to Winfrey, other celebrities like basketball star LeBron James, entertainer Common, director Ava DuVernay, rapper Travis Scott, and singer Rihanna have lent their star power through live appearances and social media appeals, especially to the growing wave of young voters. And a fair share of political rock stars have “hit the hustings,” including the Clintons, former Vice President Joe Biden, and of course, Barack Obama, who crisscrossed the nation tirelessly campaigning for congressional candidates as well as endorsing Abrams, Gillum, and former NAACP head and Silicon Valley venture capitalist Ben Jealous, who is battling GOP incumbent Larry Hogan to become  Maryland’s first black governor.

Such organizations as the Black Economic Alliance, an organization of African American executives and entrepreneurs who identify and support candidates who seek to advance economic opportunities for blacks, have also used their clout as a galvanizing force. In a recent interview with commentator Roland Martin on The Tom Joyner Radio Show, Charles Phillips, CEO of the BEA PAC and one of BE’s Most Powerful Executives, said that “they have had a $10 million impact” as well as endorsed candidates in the midterms expected to ‘help the black population most.” And the NAACP released a public service announcement Sunday that features prominent civil rights and social justice leaders, urging black voters to exercise their franchise. Participating in the video are civil rights icon Rev. Jesse Jackson Sr.; NAACP president and CEO Derrick Johnson; National Urban League president Marc Morial; NAACP Legal Defense and Educational Fund president and director-counsel Sherrilyn Ifill, among others.

Here’s How Black Voters Will Be Crucial to the Midterm Elections Outcome:

The biggest check on the Trump administration will require Dems to control both chambers of Congress, which will greatly impact immigration, healthcare, education, potential Supreme Court nominations and voting rights, among other hot-button issues. In fact, political analysts cite some of the tightest statewide contests are Senate races in the Midwest, Florida, and Tennessee. In fact, Black Enterprise recently reported that Mike Espy’s bid to become the first black U.S. Senator from Mississippi in a special election there may prove the decisive factor in flipping the Senate. In each of these contests, Obama-level African American voter turnout is crucial. The voting bloc that is of particular relevance: black women. They were responsible for Doug Jones’ victory over ultra-conservative GOP candidate Roy Moore for the U.S. Senate in last year’s special election in Alabama.

As “The Conscience of the Congress,” the CBC represents the fiercest opponent of Trump’s policies. In fact, the group released a mini-documentary explaining lost ground for African Americans under Trump, including areas like safety, healthcare, equality, and justice. If all African American candidates win on Tuesday, CBC membership could vault from 49 to 55. Given that a large number of long-term Democratic CBC members have seniority, they will assume chairmanship roles on key committees such as education and the workforce (current ranking member Rep. Bobby Scott -VA); Financial Services (current ranking member: Rep. Maxine Waters – CA); Oversight & Government Reform (Current Ranking Member: Rep. Elijah Cummings – MD); Homeland Security (current ranking member: Rep. Bennie Thompson–MS);and Science, Space & Technology (current ranking member: Rep. Eddie Bernice Johnson – TX). Moreover, their numbers will give the CBC  leverage in negotiating key legislation and developing influential alliances with other congressional caucuses. Moreover, current CBC Chairman Rep. Cedric Richmond (D-LA) sent a letter to congressional colleagues last week requesting that an African American legislator assumes one of the top two leadership roles—Speaker of the House, which is elected by the entire body, and Majority Leader—should the Dems seize the House next week.

Among the most celebrated and brutal races on the statewide level have been Abrams’ run in Georgia; Gillum’s campaign in Florida; and Jealous’ race in Maryland. If all win, they will represent the first triumvirate of African American governors to hold office simultaneously. The only blacks elected to serve as chief executive in statehouses: the first was L. Douglas Wilder of Virginia, who served from 1990 to 1994 (Virginia does not provide for consecutive gubernatorial terms) and Deval Patrick of Massachusetts, who served two terms from 2007 to 2015. (David Patterson, the first black governor of New York, was appointed in 2008 when Gov. Eliot Spitzer was forced to resign.) In addition to running the state, those positions become vital in terms of the oversight of education, business, public safety, and voter registration, among others, as well as a check on gerrymandering of districts by the State Legislature and appointment of U.S. senators from a given state if any should have to leave office. Moreover, the statehouse has traditionally positioned its officeholder for a White House run.

Moreover, there are a number of statewide candidates who could be placed on the path to the governorship in the future. Keith Ellison, deputy chair of the Democratic National Committee and first Muslim congressman, is running for Minnesota’s attorney general, a campaign that has been dogged by domestic abuse allegations but managed to retain backing from prominent party officials and politicians. In New York, two African American candidates, Letitia James, a Democrat and former public advocate for New York City, and attorney Keith Wofford are facing off for state Attorney General. If James wins, she will be the first African American woman to hold statewide office in the Empire State. Nevada Senate Majority Leader Aaron Ford is running for that state’s attorney general office.

In more than 400 congressional races, some 36 gubernatorial contests or the 150 or so statewide ballot initiatives, voters will play a vital role in determining current policies and future direction that impact a nation. As Oprah Winfrey urged in her stump speech, black voters must not let sitting on the sidelines be a part of their legacy.