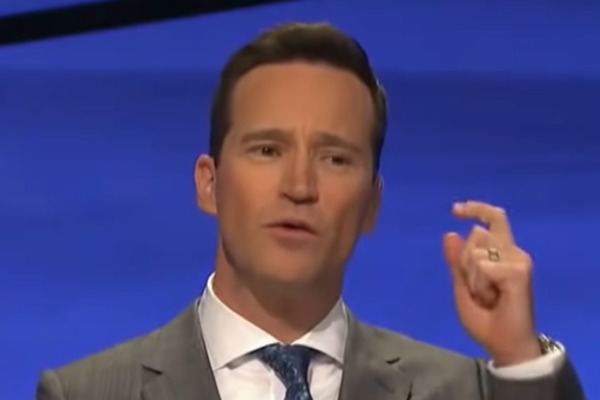 On Friday, Richards announced his early exit after he got called out over his past comments about women, Jews, and poor people, NBC News reports. Richards was one of several guest hosts following the November 2020 passing of the show’s legendary host Alex Trebek.

While many on social media petitioned to have Reading Rainbow creator LeVar Burton serve as the new host, somehow the show’s EP was selected to fill the spot. But not too long after Richards was announced as the new host did critics dig into his past and unearth some of his old insensitive comments.

In addition to the two discrimination lawsuits, Richards was previously involved in, details emerged into the disparaging comments he made seven years ago while working as the co-executive producer of The Price Is Right and hosting a podcast called The Randumb Show.

In his lengthy statement, Richards announced his decision to step down to avoid being a “distraction” to the beloved game show’s continued legacy.

“I was deeply honored to be asked to host the syndicated show and was thrilled by the opportunity to expand my role,” Richards said. “However, over the last several days it has become clear that moving forward as host would be too much of a distraction for our fans and not the right move for the show.”

“As such, I will be stepping down as host effective immediately. As a result, we will be canceling production today,” he added.

As the show’s EP, it’s been revealed that Richards had control over most of the recent season, CNBC reports. Many were upset when Levar Burton wasn’t selected as host while the decision was credited to the low ratings he received during his guest-hosting stint.

However, with Burton hosting during the Tokyo Olympics prior to the revelation that Richard gave directions to guest hosts, controlled the promotion of each episode, and picked which episodes were sent to test groups for evaluation, it’s likely Richards had the final say on Burton getting snubbed.

Now is that karma we hear calling? Richards rest those legs while you take a big seat.