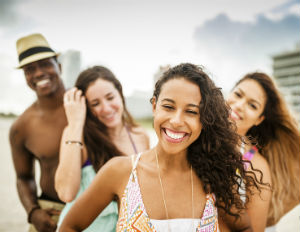 I’m what some might call a Millennial Success Survivor.

You may be wondering why I chose to use the word ‘survivor.’ You see, I had recently graduated from Florida A&M University and finished a two-year commitment program called City Year, a non-profit organization that focuses on decreasing the dropout rate in under-resourced schools.

When the program ended, I jumped at the opportunity to be business partners with a multi-millionaire who later became my mentor. You’re probably thinking, what a great start. Yes, it absolutely was a terrific coup for someone like me who had a ‘by any means necessary’ mindset.

I was excited, confident and ready to take on the world. My mentor’s company was in pre-launch on a project that was projected to be a mega success, assuming nothing drastically negative happened in the marketplace. So, I felt like I was really winning. I’d left my City Year role and within months I was being mentored by a successful businesswoman. Yes, I was definitely winning.

Two days into the arrangement I knew I was in trouble. The level of expectation was unlike anything I’d ever known. Sure, I had high standards (so I thought) but now I was also dealing with new language, new industry, and new skills to learn. Plus, it didn’t help that this new ‘business partner’ was also my aunt.

Within 6 months of working with her, I was fired. And I was devastated.

As a millennial, my idea of working hard and completing tasks at my own pace didn’t quite match my mentor’s ideas of working hard, smart or effectively. Balls were getting dropped. I didn’t want to ask for help because I felt like I could figure things out on my own. Even though the words were never said, I felt pressure to do well for so many reasons.

We had weekly webinar meetings where she’d dropped gold nuggets of knowledge designed to help me perfect my craft, but inside I just knew I had all the answers. Didn’t matter that I had no ‘real world’ business experiences to speak of, I still knew everything. Or so I thought.

Each week she showed me that while I thought I was detail- oriented, I really wasn’t. In fact, I lacked discipline and consistency in most areas of my life. Boy, what a wake up call.

I’d somehow convinced myself that I had it all together. And when the incentive for work was not as I expected it to be, the number of excuses I told became epic. Let’s just say I could have written a book about nothing but the lies that people tell themselves and the excuses they make to help themselves feel better about those lies.

That’s why when she called me one day to fire me, I can’t say I was totally surprised. Still, I cried, I tried to make excuses, and I even thought about asking for a second….10th chance, but I knew I’d screwed up big time. So, after doing some serious soul searching and reevaluating what I wanted my success to look like, I had an epiphany.

I’d been afraid to succeed and possibly, to fail as well. Despite my success at City Year, my mindset of fear and doubt had crippled me. By firing me, my mentor had actually pulled me out of the darkness and made me realize I already had the ‘special stuff.’ I just needed to get real and get serious before I made my next move.

Through her guidance, and what I now affectionately refer to as ‘cutthroat’ coaching, I rose from the ashes a true millennial success story. A young woman who’s decided to leverage her talents and create a platform for like-minded millennials to do the same. My YouTube show is called Millennials On The Move.

I survived the trial that began my journey to self-discovery and success. Ironically, success is something many millennials actually resist. Yes, we live in an instant gratification world due to advances in technology. Yet many of us are still selling ourselves and our dreams short by taking shortcuts.

I had to ask myself, ‘What am I doing to prevent myself from reaching my full potential?’

Whether you choose to succeed as an employee, or start your own company, the road to success is paved with tons of great intentions and would-be success stories, but only about 10% ever cross the finish line. Those who do understand that working smarter; not necessarily harder, is the key. The truly successful know that being open to learning, and getting a coach or mentor to show you the ropes is much more effective than pretending to have it all together but stumbling through mistake after mistake.

Finally, as a recovering know-it-all myself, I can honestly say that if you can just be honest about your strengths and weaknesses, now, rather than later, you’ll put yourself in a position to achieve tremendous success–if you don’t quit.

If you’re a young entrepreneur looking to get on the fast track to success, check out Micha’s course, From College To The Real World.

Micha Nixon is a millennial success expert, entrepreneur & lifestyle coach, focusing on encouraging millennial business and social entrepreneurship. Through her weekly YouTube show, Millennials On The Move, she highlights ideas, products, innovators and mentors who can help millennials succeed at life and business.