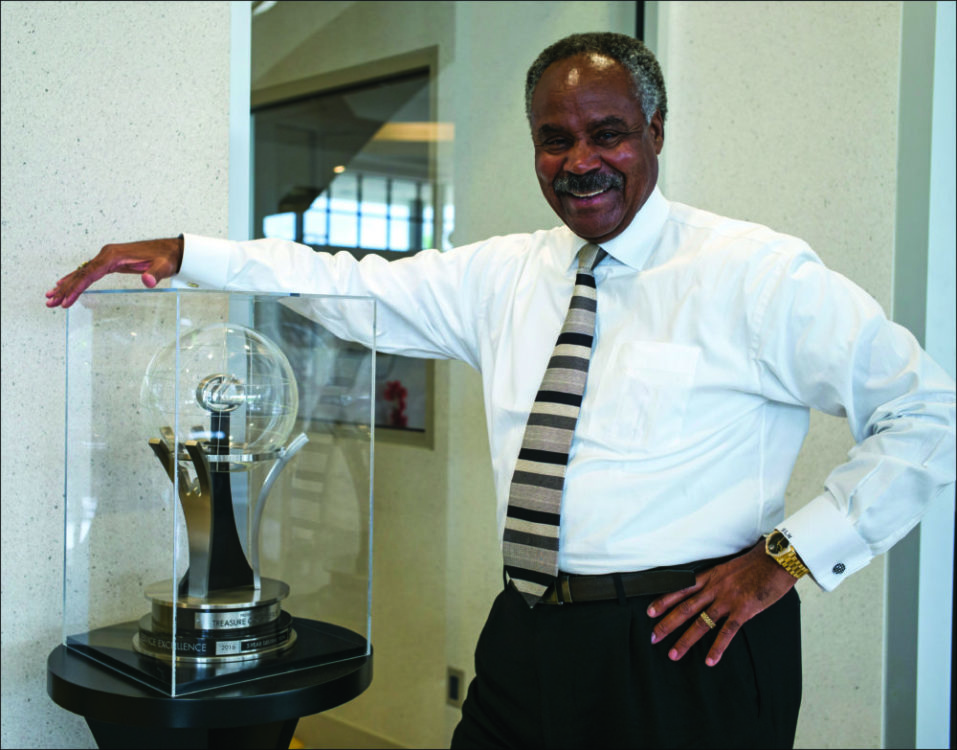 Sandy Woods with his Lexus Award

Folklore says pirates such as Blackbeard buried their treasures along the Eastern Florida Coastline between what is now a small town called Stuart, running up to Sebastian, just on the other side of Vero Beach. Sanford L. Woods, who prefers to be called “Sandy,” says he hears about people finding Spanish gold coins called doubloons all the time along this region of the Atlantic shoreline. It’s also where his dealerships, Treasure Coast Lexus and Treasure Coast Toyota, have gained their names. He is the CEO and Chairman of S. Woods Enterprises Inc., the parent company of these two successful franchises. Woods concedes that he hasn’t discovered Spanish gold himself, but he has managed to generate substantial wealth. And now, after more than 45 years as an auto dealer, he is seeking to pass on his bounty and the day-to-day operations of his treasured business to the next generation. His youngest daughter, Amber, is practically steering the ship in an industry that’s changing as quickly as the tides.

Witnessing the elder Woods interact with Amber, his stellar crew of salespeople and mechanics, and back-office support team is to view an admirable display of leadership at its best. He’s applied his managerial prowess, a combination of carefully crafted salesmanship and entrepreneurial fortitude, which has enabled him to navigate his fleet of dealerships to the top of the be 100s. With his corporate flag planted solidly in the ground where he’s built his profitable Treasure Coast franchise, S. Woods Enterprises ranks among the nation’s largest black-owned dealerships, which not only includes the Florida-based franchises but Lexus of Ann Arbor, the Michigan-based dealership in which he holds a 51% ownership stake. He recently sold the Infiniti of Ann Arbor, in which he had a 51% ownership stake, for an undisclosed amount.

Last year, Treasure Coast Toyota sold 2,496 new cars, compared to 1,324 in 2016—an 89% increase. Combined with a 15% sales hike from Treasure Coast Lexus over the same period, the two dealerships helped drive S. Woods Enterprises to become one of this year’s sales leaders with an impressive overall 31% revenue growth, from $182 million in 2016 to $238 million in 2017.

Still chairman of the board with veto power over every decision within the company, Woods remains skipper of the enterprise. But he’s also quick to attribute the company’s steady growth to the hard work and leadership of his 37-year-old daughter. With oversight of flagship Treasure Coast Toyota, Amber represents the youngest black woman in the nation to operate a dealership.

Woods beams: “Our Toyota store was the big mover [and] my daughter took over the business two years ago. That’s the store that had the second highest profit year ever, in my entire 29 years [coming in within $100,000 of profitability]. This year, we’re projecting that we’re going to do over 3,000 units, and we’re well on our way to do that.”

Amber humbly says “I can’t take full credit,” but admits to a willingness to be daring. “I took a couple of big risks that I know my father probably would not have allowed me to do if I didn’t have the experience I have now. When I was in the business before, he would not have let me take those risks. But I had a gut feeling, and I trusted my gut.”

Larry Lee Jr., state representative from Florida’s District 84, has witnessed the byproduct of this symbiotic relationship: “That Toyota dealership is the No. 1 black-owned Toyota dealership in the country, in sales. Out of 1,200, I think they’re ranked 117 out of all Toyota dealerships. And a black man owns that, and his daughter is the reason that those sales are up there.”

Due to its superior performance, consistent leadership and seamless generational succession rare among black automotive dealers, S. Woods Enterprises has been named our 2018 be 100s Auto Dealer of the Year.

Sandy Woods was born in the small, predominantly black town of Dermott, Arkansas, but grew up in Alamo Gordo, New Mexico, after his family moved there when he was 5 years old. Spending his formative years in the state, he graduated from Western New Mexico University in 1973, with a degree in mathematics. After stints at insurance companies in New Mexico and Colorado, the young executive was hired by Chrysler Corp. He then spent more than 16 years making his corporate ascent, holding 14 different managerial positions during that period. By 1987, he was tapped to oversee Chrysler’s Minority Retail Dealer Development Program, derived from a deal Lee Iacocca, the company’s famed CEO, made with members of the Congressional Black Caucus (CBC) nearly a decade earlier to gain its backing for huge bank loans to save the automaker from bankruptcy. The terms between Chrysler and the CBC: the development of black auto dealers.

Woods reluctantly took the position for 24 months after arranging with a vice president of sales that he would be elevated to zone manager, which was his ultimate career aspiration. “When I took over the program, it was in shambles,” he reflects. “We were in lawsuits. We were upside down and losing money. There was no program—nothing!”

Demonstrating his managerial dexterity, Woods settled all lawsuits and developed a structure for the program. It turned into a profit center within 18 months. By 1989, he decided to change his career track, turning down a zone manager position to take over a new dealership in Tampa, Florida.

He quickly discovered that being a corporate auto exec was a far cry from being a dealer selling cars. Early on, he found himself in way over his head, everything was “trial and error.”

“I knew nothing about the car business,” he recalls. “The first two years, I lost my shirt: $504,000 in my first 25 months.”
At his lowest period in business, he called his father for help. Woods recalled the conversation:

“Pop! I’m in trouble. I can’t figure this retail car business out.”

“Let me ask you a couple of questions,” his father responded. “Are you working hard?”

“Absolutely! Plan this. Process that. Operational forecasts… You name it, I did it.”

With a small tear in his eye, Woods said of his father’s tough-love advice: “My father stopped me in my tracks and made me think about what I was doing. That was my defining moment. That’s what turned me around.”

Striking Gold as an Auto Dealer

When he hung up the phone, the determined Woods resumed the analysis of his annual plan, reorganized operations, and continued to work hard until he struck gold, at last, as an auto dealer. Within a year of that fateful conversation, his dealership generated a puny $355,000 in revenues. The following year, his restructuring resulted in a staggering 249% revenue growth, grossing $1.2 million. After four years, his dealership generated an impressive $2.4 million in sales. “I was the third most profitable Dodge dealer in the country,” he recalls proudly. “I was No. 10 in volume. And then, I started buying dealerships.”

Woods shrewdly added real estate to his portfolio, purchasing—instead of leasing—the properties in which he operated his Tampa dealerships and charging rent. Beyond the automotive sector, he continued to diversify operations through a partnership to open three Popeye’s Chicken franchises but would later sell his stake back to his partners nearly 15 years ago.

By 2006, Florida Trend, a monthly magazine covering business, industry, education, and leisure, identified S. Woods Enterprises Inc., as being among the top 55 privately owned businesses within the Sunshine State. Woods is president of the board of directors for the Toyota Lexus Minority Owners Dealership Association, and in 2015 the National Association of Minority Auto Dealers (of which he is a board member) presented him with its Lifetime Achievement Award.

Today, Woods’ business portfolio consists of three dealerships, plus 57 acres contiguous to the Lexus store, another 5 acres in downtown Fort Pierce, and a series of other business ventures and properties under contract. It’s the Treasure Coast dealerships, however, where he unearths the richest veins of gold.

Passing to the Next Generation

At 69, Woods—who has long since quit smoking and drinking and says he’s in “better shape than when he was in high school”— continues a daily regimen of checking the progress of the Toyota and Lexus dealerships but sleeps well knowing his daughter is advancing the business.

Florida Rep. Lee adds, “We need to show blacks what Sandy is doing. He’s handing the baton off to his daughter. These young black girls need to see somebody like Amber. I’m all about showcasing what can happen when you dream, and when you have a vision.”

The elder Woods doesn’t plan to give up his spacious second-floor office overlooking the Lexus showroom floor, in the building he designed and built, anytime soon. But if anything were to happen to him, he says Amber is already in charge. He finalized the transition in 2017 when President Donald Trump signed into law the congressional tax reform act to take advantage of new provisions related to estate planning: “The law increased some of the one-time, lifetime gifting scenarios. I gifted over to her the business without any tax consequence to her or any tax consequence to me.”

Of course, passing on a dealership—or any business—to the next generation requires corporate restructuring. “It was a very difficult process because I had to set up different L.L.C.s,” he says. “Setting up the whole structure was probably the most difficult thing, and then I had to explain it to the executives at Toyota and Lexus because they didn’t understand it.”

Moreover, Woods has structured his array of businesses so Amber holds a 75% ownership stake in them. As for S. Woods Enterprises Inc., the umbrella entity that controls everything, Woods, as president and CEO, owns 100% with Amber serving as vice president and designated heir apparent. “My daughter runs the day-to-day operations,” Woods says. “She and my chief financial officer report to me. Everybody else reports to her.”

“I have a responsibility, and it’s a blessing,” Amber says confidently. “I get to know our people because they’re not a number. My management style is literally caring. I care! I care if our associate is happy. I care if they’re sad. I care if their dog dies. We’re human, and I put the human into the business.”

For Amber, it’s always been business in her family. At 15, she worked weekends for her father at his Florida dealerships, taking on various roles from service dispatcher to customer relations manager. After her graduation from the University of Central Florida and a brief hiatus in the New York metro area, she returned to the family business and took a more active operational role. “I had her do two things: open all the mail and sign all the checks.” Following Amber’s completion of NADA training, Woods says, “Then, I put her through each of the departments. Two years ago, I made her general manager at the Toyota store. And that’s when it took off. She hired the key pieces of the puzzle. She got rid of all the people I had, and she fired me. After all of that, Treasure Coast Toyota took off.”

Woods trusts his daughter to follow her gut and to take risks, even if she makes a few mistakes along the way. He’s confident, however, that as she assumes the mantle, she will plot the company on a new course to discover even more bountiful treasure.