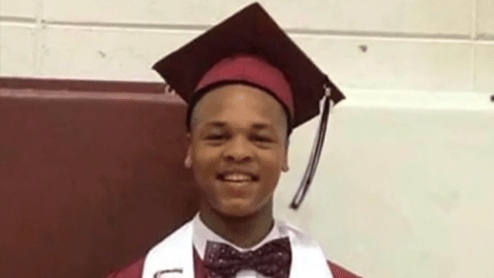 Over the weekend, a police officer in Mississippi responding to a call of a shooting arrived on the scene to discover that the victim was her son.

According to WLBT, authorities were called to the scene several blocks away from the Hazlehurst Police Department Sunday at 2 a.m. Police officer Laquandia Cooley responded to the shooting on Larkin Street. Upon arriving, Cooley saw the victim.

Shot in the head, left in the middle of the street, was her 20-year-old son, Charles Stewart, Jr. He was already dead.

“We initially responded to the call, not knowing when I made it over there, the person was going to be my son that was laying there,” Cooley said. “As we get out, I look and I was like, ‘This is my son, this is my son.’ So, I literally just go into a break down you know? Like, why? Who would do this to my son?

“I couldn’t even believe what I was seeing. I was seeing my own son laying there on the ground dead. It was pretty much a panic. It was just, it was too much.”

PHOTO: Charles Stewart, Jr., 20, was shot and killed Early Sunday morning in Hazlehurst. His mother, Officer Laquandia Cooley, would be the one to discover her son’s body lying on Larkin Street. https://t.co/EPkLnA3EdA pic.twitter.com/HgQUhtPWNJ

Stewart’s father, Charles Stewart Sr.,  said his son was a good person and got along with everyone. “It’s traumatizing for the whole family,” he added. “We’re just trying to cope day to day. Just trying to figure out why this happened and who could have did this.”

As the crime involves a family member of a police officer from the Hazlehurst Police Department, Chief Darian Murray said the case will be handed over to the Mississippi Bureau of Investigation.