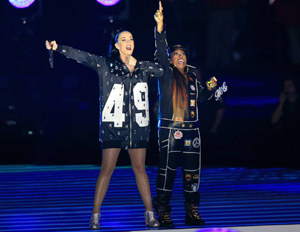 After Missy “Misdemeanor” Elliott blazed the Super Bowl halftime stage, data analysts immediately started to project the innovator’s post- Super Bowl sales. Loyal fans and new era kids who thought she was a promising new talent were so amped over her performance that they started downloading Missy’s megahits.Â Nielsen predicted that she would see a 1,000% sales increase by week’s end, and to no surprise, they were right on the money.

In fact, the superstar who hasn’t released an album since 2005 beat halftime headliner Katy Perry with two singles from her three-song medley. “Work It” (21,000 downloads) and “Get Ur Freak On” (19,000 downloads) outsold Perry’s hit “Roar,” which, according to Billboard, was Perry’s biggest seller and shifted slightly to more than 17,000 downloads.

The halftime eventÂ set a record for most viewers, garnering an audience of 118.5 million. Perry, Elliott, and Kravitz, who also lit up the stage, took the record-setting crown from Bruno Mars who made history last year with 115.3 million watching fans. Up until now, the fairly new soul star attracted the most views, beating out BeyoncÃ© (110.8 million) and Madonna—whose Super Bowl show drew in a crowd of 114 million.