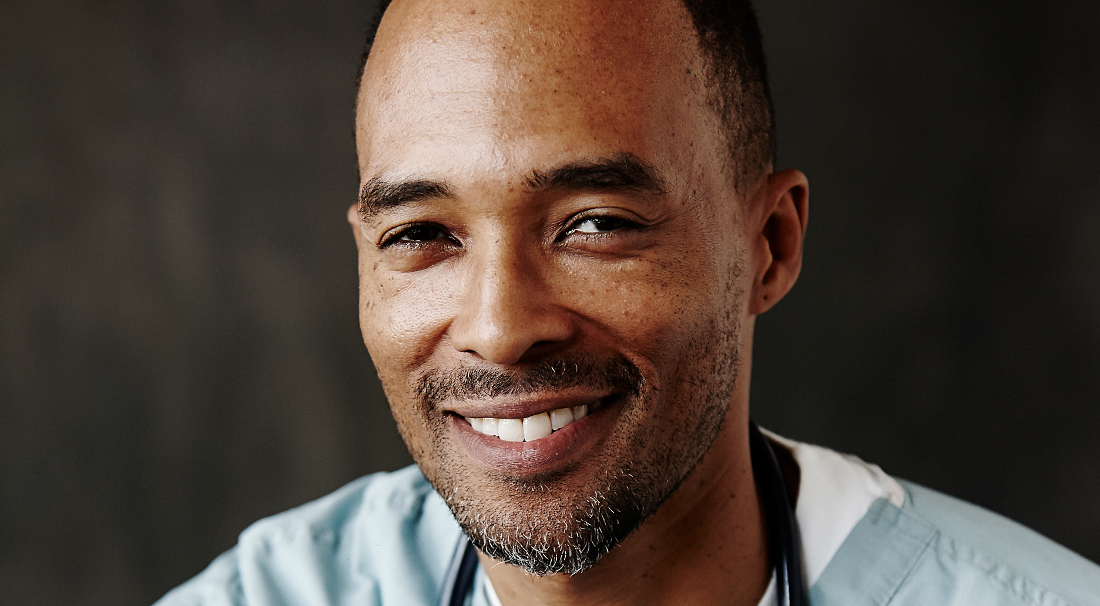 One Word That Describes You: Visionary

I feel honored to be included amongst a dynamic group of men that are both committed to their respective crafts and also inspire others to do the same.

When I was in my residency at Cook County Hospital in Chicago, I was frustrated and struggled with seeing young men of color coming in as victims of violence. This frustration continued while working in the emergency department at Kings County-SUNY Downstate Hospital in Brooklyn. I remembered seeing a t-shirt when I was a student at Morehouse that said, “Lead, follow, or get out of my way.” Eventually, I gathered a team of friends and colleagues, and we developed a hospital, school, and community-based violence intervention and prevention program to deal with and change the scope of violence in our communities.  Our program has been effective at helping prevent violence, victims and survivor retaliation after being injured, as well as playing a pivotal role at increasing mentoring and educational opportunities for the students in our school and community programs. Instead of struggling and being frustrated with what we saw, we made a conscious decision to lead.

I like to work with people who are friendly, creative, teachable, and competent. When I was interviewing medical students for emergency medicine residency positions, we had something called the “3 a.m.” test.  If you’re working overnight and its 3 a.m. and completely quiet, will the person be someone you would like to have a conversation with? Or, if it’s 3 a.m. and the ER is extremely busy, can the person get things done and take great care of the patients? It’s difficult to work with people if you don’t enjoy being around them, especially when a lot of what we do is based on a team dynamic.

I’m currently a TED resident, as in TED Talks. The residency is an idea incubator space made up of “smart creatives” from around the world.  At TED, I’m working on expanding my current work with violence intervention and prevention and integrating the field of design into the mix.

I’m the founder of the KAVI youth violence intervention and prevention program, and have been working on solutions tackling the issues of violence within our community. We have hospital, community, and school-based programs, and we are currently creating a more solid infrastructure for our programs. We are working on improving and increasing our resources and team, which would allow us to provide greater services to young people affected by violence.

I’m also in post-production for a documentary series my friends and I shot in Haiti called The Global Empowerment Project, which incorporates travel, philanthropy, and community.  The plan is to finish by the end of the summer—maybe sooner.

“Get out of your head.” Mentors have told me this, and I’ve also passed this on to my mentees.  We often get caught up about whether our abilities or ideas are good enough and suffer from analysis paralysis, never executing on what needs to be done.  Often, whatever you do is not going to look pretty when you start out. You just need to be ok with it. But also, be persistent with whatever you are working on or developing, so that it will eventually look like what you have always envisioned.

First, define what it is that you want to make a difference with.  Figure out what you are good at and see how you can use your skills to make a difference. The most important part of making a difference is developing a team of individuals that share your vision. This way you can develop a system of support, share resources, and be more effective.

Before I go to an important event or meeting, it’s important to know my audience or who I am meeting with. Who are they?  What are their interests? What are the cultural practices and customs of the people I’m meeting with (especially if it’s with a particular ethnic group or in a foreign country)? What’s the purpose of the gathering? What do I want to get out of the meeting?

I Google people, organizations, and events and create files in my phone, including key people I need to meet, hyperlinks of their organizations, and points of connection that I can review at the last minute before I walk in. Planning is important, but we also have a tendency to plan so much that, if anything differs from the outcome we desired, we become upset and frustrated. A big part of going to an important meeting or event is being both flexible and open to unexpected possibilities.

I snowboard whenever I can and whenever the weather permits.  It’s a time where I can completely shut my mind off and be at peace. I don’t think about work, I don’t think about what I have to do tomorrow, and I don’t think about what I did the week before.  I just focus on the current space I’m in. Most of the times that I’ve fallen while snowboarding was when I was thinking about something other than the mountain, which is a painful lesson but also a reminder to be present. I grew up in NYC and love NYC, but there is something special and restorative about spending time in the natural elements like the mountains.

My friends and I usually make a snowboarding pilgrimage out west (The Rockies, Northern California, British Columbia). One of our crew members lives in Japan and convinced us to go snowboarding in northern Japan at Niseko Mountain. It started out as a small group of about 15 people, but after posting the trip on social media, there were 100 black skiers and snowboarders that joined the trip. Can you imagine what it looks like to see 100 black people on a mountain in Japan? We made history.

I’ve enjoyed almost all of the countries I’ve visited for work and pleasure. They have all been called “my favorite” places I’ve traveled to until the next trip.

I want to go to Bolivia next. I’ve spent time both traveling and working in different countries in South America, but the one country that a number of the backpackers and hikers mention is Bolivia. There is supposed to be great hiking and natural scenery that hasn’t been overrun with tourists. Since it hasn’t been overrun with expats and is a little less developed than some of the more popular countries, there are still native people living in a way that pre-dates the arrival of European conquistadors. I don’t mind being around tourists, especially since I become one the minute I set foot on foreign land, but I love to connect with the people who are from the country. I want to hear about their way of life, culture, and lifestyle and get a chance to experience it other than the re-created version for foreigners. Plus, the less tourists around, the more I’m forced to speak Spanish.

I want to congratulate all of the other BE Modern Men 100 Men of Distinction and I hope that this platform can be used to further inspire an even greater movement of current and future visionaries, activists, change makers, and change agents.

If you are interested learning more about the work we do with our KAVI youth violence intervention and prevention program, and supporting our efforts, please check out our website at kavibrooklyn.org.