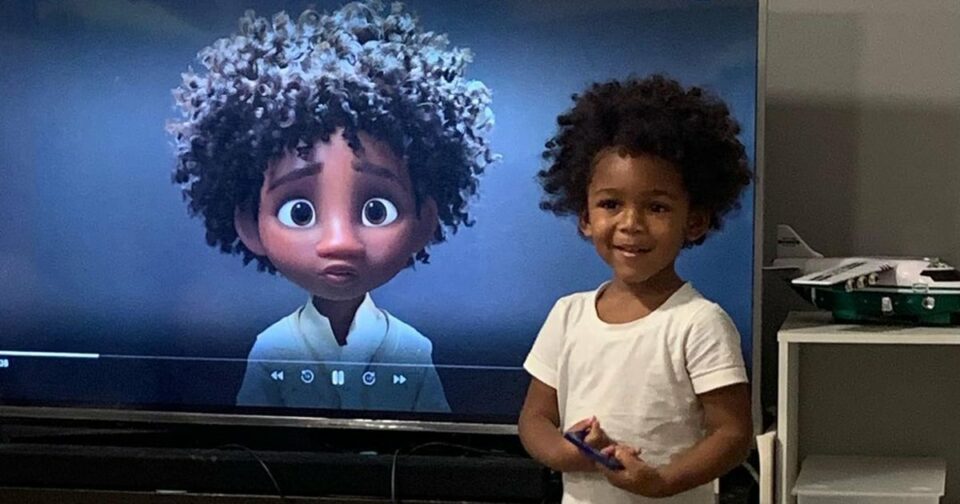 Positive images of Black people and culture portrayed in media can influence the perceptions and behaviors of Black children. The more positive, the more power it can exude within Black and brown communities.

During a family viewing of Disney’s Encanto, Kah Brand was ecstatic to witness her two-year-old son Kenzo personally connect with one of the characters, a young boy named Antonio. In fact, she was inspired to capture the moment when her son realized that he and Antonio looked very much alike.

“He seemed to be in awe, just smiling and staring at the screen,” she told POPSUGAR. “Then he stood up and looked back at his dad and me, still smiling. For him, I truly believe that he thought he was seeing himself because of the resemblance between him and Antonio.”

“It is essential for Black children to feel seen and to be connected to positive and empowering images for their self-esteem.”

“As a mom, I’m always trying to capture ‘these’ moments,” she said. “I was amazed at his reaction. It just truly made me smile and my heart happy.”

It was a particularly joyous moment, because it wasn’t just about the resemblance.

“It was the impact of feeling seen,” Kah continued. “It is essential for Black children to feel seen and to be connected to positive and empowering images for their self-esteem.”

There’s been a lot of joy and excitement surrounding Disney’s latest film, Encanto, since its Nov. 24 release. The animated movie is set in Colombia and tells the story of a young woman by the name of Mirabel, who fights to find acceptance from her magical family that lives in a big magical house.

According to POPSUGAR, the impact of watching Encanto together encouraged the family to think of a character from their own childhoods with which they connected.

“But these characters weren’t around,” Brand said, recalling her own generation. “We didn’t have this growing up. What’s so special about Encanto was that it didn’t stop at just showing us brown characters. It showed the diversity in hair textures and skin tone. I’m so grateful for moments like this because I’m aware of its impact, especially for brown boys and girls. It brings joy to our family. There’s power in representation and magic in creativity. This generation and future generations will experience inclusivity because the film industry is moving in a direction that reflects the true diversity of our world.”

On Friday morning, Kenzo and his parents appeared on Good Morning America and were offered a trip to Disney World.