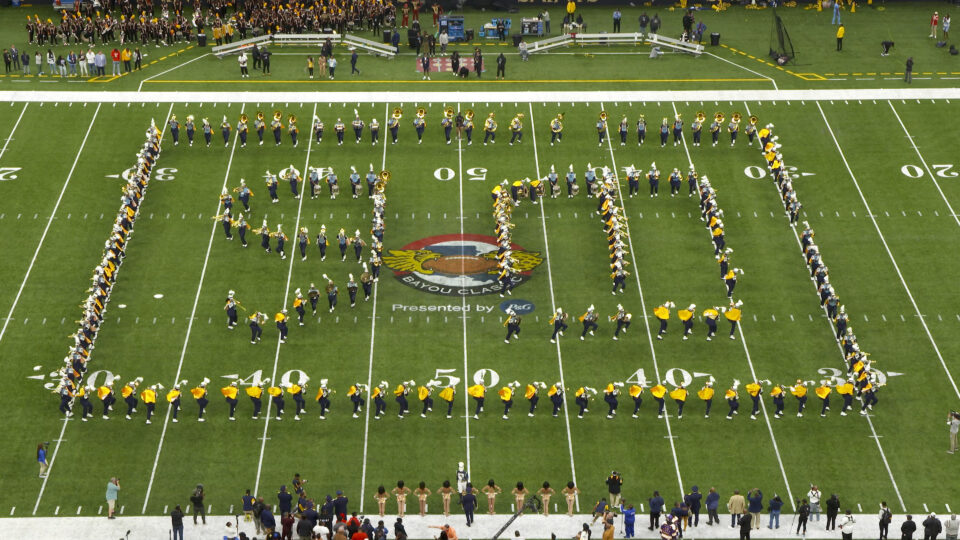 Tens of thousands flocked to New Orleans late last month for the 48th annual Bayou Classic at Caesars Superdome in New Orleans, LA, for a glorious display of HBCU football, bands, and pride.

The festivities began the day after Thanksgiving, starting with an epic showdown between the marching bands from Southern University and Grambling State University at the “Battle of the Bands & Greek Show.” Then, on Saturday, the Southern Jaguars faced off with the Grambling State Tigers in a highly anticipated football game. Grambling won, 29-26.

The Superdome sizzled with excitement at this year’s Classic, which was postponed in 2020 due to the COVID-19 crisis. Since 1974, HBCU students, alumni, and supporters have convened for the Bayou Classic, which features a matchup between one of the greatest HBCU rivalries in the country: Grambling State University vs. Southern University.

The annual series of events celebrates football, family, and the traditions surrounding Historically Black Colleges and Universities. According to the official website, the Bayou Classic attracts more than 200,000 visitors to New Orleans each year, providing a $50 million economic impact to The Big Easy. Proceeds from the events are used to support the campuses’ athletic programs and fund scholarships.

In October, SWAC announced that General Motors (GM) had signed on as its official automotive sponsor until 2024. Under the three-year deal, GM will support multiple touchpoints from championship events and scholarships to Esports gaming labs and workforce readiness and recruitment initiatives.

The partnership serves to increase cultural capital for GM and its brands and to fuel the car company’s effort to recruit HBCU students. Support for SWAC is also part of GM’s overall commitment to invest in and support the Black experience. Under the deal, GM will hold the presenting naming rights to the SWAC Football Classic featuring Alcorn State University Braves vs. Jackson State University Tigers.

“We champion diversity and inclusion on all fronts. Our commitment to Historically Black Colleges and Universities is paramount to strengthening our diverse talent pipeline and propelling the visibility of student athletes, alumni, and each of the universities represented,” said Tarshena Armstrong, director of diversity marketing and development for General Motors, in a statement.

“Representation matters. SWAC is the premiere HBCU athletic conference boasting a celebratory spirit of community and connectivity. GM is proud to help drive change and impact with our partnership across each of the SWAC sporting events,” she added.

The deal comes more than a year after General Motors CEO Mary Barra pledged to make “GM the most inclusive company in the world” amid the protests that followed the police killing of George Floyd. In addition to a significant focus on HBCUs, GM’s long-term commitment to advance the African American community includes a commitment to allocate 2% of its ad spending to Black-owned media in 2021 and 4% in 2022. The company’s goal is to reach 8% by 2025. GM has also committed $4 million of its $10 million Justice to support the NAACP Legal Defense and Educational Fund, the MLK Memorial Foundation’s Inaugural Social Justice Fellows Program, and other organizations doing critical racial justice work.

“As we aspire to be the most inclusive company in the world, GM’s success will depend on nurturing diverse talent, especially in STEM fields. Our collaboration with SWAC creates valuable connections with thriving HBCUs and their communities,” Deborah Wahl, General Motors’ global chief marketing officer, said. “I’m proud that GM is fostering opportunities for these incredible student athletes to excel, both today and as they embark on their future careers.”