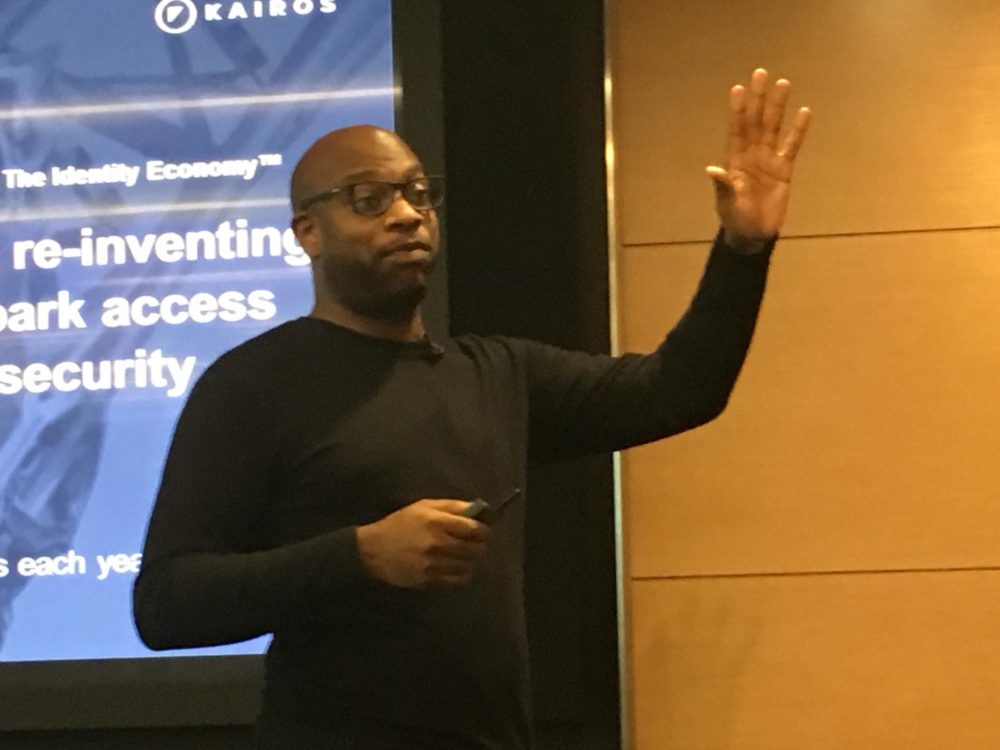 Welcome to Demo Day, the showcase for a group of tech innovators who participated in Morgan Stanley’s Multicultural Innovation Lab to reveal to business leaders, financiers, and other observers their plans to disrupt global industry.

On this crisp, mid-November morning, one of the presenters, Brian Brackeen, paces back and forth as he gives a pivotal pitch for his tech venture, Kairos, in a jam-packed auditorium at the financial services giant’s Times Square headquarters in New York.

As facts and figures flash on the screen behind him, the Miami-based entrepreneur shares its transformative impact: “Kairos is an artificial intelligence company that uses facial recognition to help enterprise customers… . There will soon be 44 billion cameras in the world. We take all these cameras with all these feeds. We give insights to our customers about all the people in those feeds. We can tell our customers who somebody is. We can tell them their age, their gender, their ethnicity…initially their face, and the emotion that they’re feeling any quarter second.”

So how does Kairos apply this technology to meet customers’ needs? One example Brackeen offers is how they help Walmart in “re-creating, re-designing, re-imagining the future of retail. They can understand people in-store as well as Amazon does outside of the store.” Kairos uses A.I. to enable another client, Veritone, the cognitive computing company that serves television networks like ESPN, Fox, CNBC, to “use our A.I. to get deeper insights.” As he continues his discussion on how Kairos facilitates predictive analysis, product and service customization, and directing consumer decisions, a slide laden with logos of some 34 customers—including Carnival Corp., PepsiCo, Ikea, and IBM —consumes the series of screens.

Brackeen, named Innovator of the Year at the 2016 BLACK ENTERPRISE TechConneXt Summit, closes by telling his rapt audience: “In the last 12 months, we processed 250 million faces. We’ve grown revenue 200% year over year and we’ve declined marketing spend on that time. Also, last quarter was our best quarter ever. Last month, was our best month ever. We just continue to trend upward and up. Kairos is Greek for the most opportune moment. We really believe that this is it.”

Morgan Stanley believed the same thing when it chose Kairos among 100 applicants to be one of four participants in the first cohort of its accelerator for startups founded by minorities and women. The four other companies that were a part of the three-month Innovation Lab: AptDeco, an online marketplace for purchasing and selling new and secondhand furniture; GitLinks, a software development company that uses its technology to monitor security threats and legal compliance; Landit, a “personalized playbook” that provides advice and feedback to help women advance in the workplace; and Trigger Finance, an investing platform that enables do-it-yourselfers to receive alerts on financial and world events and incorporate them into their portfolio-building strategies.

The mastermind behind the accelerator’s development: Carla Harris, Morgan Stanley’s Vice Chair, Wealth Management and head of its Multicultural Client Strategy Group. “Only a fraction of all venture capital money is given to multicultural and women entrepreneurs,” Harris told BE. “Morgan Stanley is a leader at the intersection of what these companies need: capital, connections, and investment banking content.”

She adds: “Given our footprint, the network of our clients, there’s really nobody that we could not connect these entrepreneurs with. Not only do we have capital but we are right at the epicenter of all the different sources of capital, whether it’s institutional, strategic, high-net-worth individuals, endowments, and foundations. We certainly could raise a level of visibility such that diverse sources of capital could come to these companies. Then, with respect to the content, we have some of the best bankers around and could give them a lot of guidance based on our own experience. Not to mention, connect them with other entrepreneurs, both public and private, that might be useful to them.”

Operating from the ninth floor of its corporate offices, the founders gained $250,000 in capital from Morgan Stanley for a 3% to 7% stake depending of the stage of a given firm’s development and, Hall says, an intensive curriculum focused on “the fundamentals of operations,” including financial management, negotiation of term sheets, development of key performance indicators (KPIs), identification of market segments, creation of a sustainable infrastructure and ability to pivot, among other critical elements. Moreover, they gained strategic input through a weekly speaker series highlighting the experiences of founders as well as heads of established firms like Morgan Stanley alum Charles E. Phillips Jr., CEO of software giant Infor Global Solutions.

To help guide them through the process, the founders also had access to the program’s Entrepreneur-In-Residence William Crowder, former head of Comcast Ventures Catalyst Fund, a $20 million venture fund investing in diverse, early-stage tech companies and current managing partner of 42 Venture Partners. Says Crowder: “My job has been to work closely with the companies and to be the liaison between the companies and Morgan Stanley, to help identify what are the two or three things that are most critical to the success of the businesses and its future—whether that be access to more capital, connections to people who perhaps have some unique expertise for that particular business that’s relevant or if they can find a way for Morgan Stanley to be a client.”

“We’ve seen different accelerators try to attack this problem with diversity. I was involved in one of those accelerators. We haven’t seen a very coordinated effort between the resources of a large institution really focused on driving the businesses forward in what I believe is a unique way,” Crowder told BE during Demo Day. “This is an authentic commitment from the corporate partner and they’ve got people who are really behind it like Carla Harris to make it an absolute success. We have these great businesses and now we’re going to figure out how the resources of Morgan Stanley can actually make those companies even more successful.”

The entrepreneurs who participated in the program confirm Crowder’s assertion. Brackeen, for instance, maintains that “we would never have access to Morgan Stanley analysts to help us come up with a big idea. This identity economy. Working with them really cemented that for us. That also acts as a capital. Not just investing, but they know every single venture capitalist in the world. So it’s been super helpful.”

Moreover, Crowder demystified the VC world for Brackeen and helped him perfect his pitch to financiers while Phillips’ consultation “clearly changed our B2B strategy as far as channel partners. He taught us how to create great channel relationships.”

In terms of its ongoing relationship with Morgan Stanley, Kairos will be engaged in a pilot to use its software for the financial giant’s traders to log in via facial recognition.

As for Landit founder and CEO Lisa Skeete Tatum who seeks growth within the $15 billion HR tech market, the program “opened doors to customers and strategies. At this stage of the company, when you’re trying to put so many pieces in place [and they] were able to go and get the best experts in different areas, and bring those in for access. “How do you think about scaling?” They brought in the best person to do that. When you want to think about how to revolve your metrics for a SaaS [Software as a Service] company? They brought in the best person to do that. Like we tell our kids, our job is to stack the deck in their favor. Essentially what Morgan Stanley did is say, “We want to help stack the deck in your favor. It’s so phenomenal.”

During the program, another member of the cohort, Trigger Finance, was acquired by Circle, a Boston-based peer-to-peer payments technology company; founder and CEO Rachel Mayer told the audience at the end of her Demo Day presentation.

The Demo Day also generated quite a bit of interest from other prospective investors. For instance, Aaron Holiday, co-founder and general partner of New York-based 645 Ventures, a “growth seed” VC with $40 million in capital under management, was impressed with a slate of “world-class founders” he believes can expand their ventures into market leaders. Says Holiday: “It’s really exciting that Morgan Stanley was able to curate a group of such high caliber that’s going to build companies that will certainly be on track, in my perspective, to become very large M&A and potential IPO candidates.” In fact, 645 Ventures has already made a bet on one member of the cohort: AptDeco is a part of its portfolio of 27 holdings.

Morgan Stanley’s Vilma is excited about the accelerator’s future prospects, preparing for the next, expanded cohort of founders of color. In January 2018, Morgan Stanley will accept applications via its website for the spring session, “We’re set to prove out the notion that we could help to close the gap in early-stage funding between Silicon Valley and their counterparts and folks who are not necessarily as accessible to message in Silicon Valley.” she says. “I think what we found were extremely smart entrepreneurs and wonderful companies that just didn’t have the right access. I think that this Demo Day is a culmination of exactly that, and it’s going to help in heightening these companies’ profiles to make sure that investors are seeing them as they would the guys that they already know on the West Coast.”

Harris believes these companies and future cohort members will produce a “huge multiplier effect” in terms of multicultural entrepreneurial growth, job creation, and wealth building. “Number one, many of these companies can be multi-hundred-billion- dollar corporations. That’s the growth potential of the markets that they’re playing in. Number two, economic wealth, not only for the founders and the initial team but for people who are working at these companies in the early days, and then beyond. I think it will also have a big effect with respect to inspiring and motivating other entrepreneurs that look like them. By raising the level of visibility around what we’re doing, I think we put a prototype out there.”