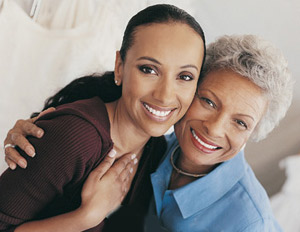 As of late, the topic of being a mother while managing a career has been the source of political and social debate. For Mother’s Day, we decided to shift the discussion away from controversy to celebration. We interviewed women in leadership, in both business and in their community, to learn which lessons from mom continue to have an impacted on their success.

“She amazed me every day as she worked 10 to 12 hours at work and traveled all across the country, but never missed a dance recital or sporting event for me or my brother,â€ says Michelle Merriweather of her mother, Brenda. Merriweather is president of the Los Angeles Urban League Young Professionals and Â business development manager for Starbucks. Both positions have allowed her to make a difference in the community. “My mother demonstrated every day that you [as a woman] can bring home the bacon and fry it in the pan.â€ Merriweather says the most important thing she learned from her mother was that “no matter how far you are able to go in business, when family needs you, you drop everything else.â€

As a first-time mother of 15-month old twins, Tami Jackson Bucker, the director of U.S. government affairs and corporate lobbyist for Kraft Foods in Washington, D.C., says she grew up in a middle-class neighborhood in Miami. Her mom, Bernice, instilled in her that children are a gift from God. As the youngest of four children, Bucker says her mother poured everything into her children. “She wanted us to experience everything. We had to be a debutant, go to college and join a sorority — because she didn’t have the opportunity,â€ said Bucker. In her career, Buckner says her mother taught her about being confident, but not overzealous. “She taught us about having pride in who you are.â€

“My mother was everything in our household growing up,â€ says Stephanie M. Gibney, owner of Accounting 4 DC. “For mostÂ of my childhood it was just the two of us and what’s strange to me thinking about it now is I didn’t ever realize what a struggle it was.â€ Gibney’s mother was enlisted in the US Army, which required a lot of moving. While being a full time soldier and mother Gibney’s mother also managed to put herself through school obtaining two masters degrees by the time she was 35. “The thing is I just never saw the struggle, says Gibney of her mother. “She made it seem effortless, we had dinner every night after she got off work and I don’t remember her not being able to do it.â€ Today Stephanie’s accounting firm is the highest rated accounting firm in DCÂ on Yelp.com, but deciding to start the business wasn’t easy. “My mother provided the best advice which was, ‘what’s the worst that could happen?’ You can just go get another job working for someone else, but I’ll tell you if you don’t take a chance on yourself then no one will.â€