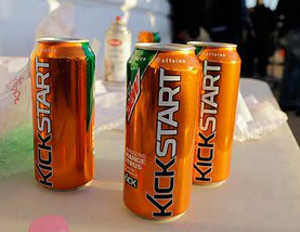 America’s infatuation with energy drinks is expected by industry analysis to slow down. Regardless, drinks such as Red Bull, Monster, and Five Hour Energy raked in more than $8 billion in sales between 2011 and 2012. PepsiCo Inc. is hoping to boost their sales by releasing their own energy drink.

The company, based in Purchase, N.Y., is rolling out a new drink called Kickstart that has Mountain Dew flavor but is made with 5 percent juice and Vitamins B and C, along with an extra jolt of caffeine. The company does not consider Kickstart to be an energy drink, pointing out that it has far less caffeine than drinks like Monster & Red Bull, as well as none of the ingredients that have raised concerns from lawmakers.

The promise of “energy” has been a big seller in the beverage industry in recent years, with the energy drink market increasing 17 percent in 2011 even as soft drink consumption has continued to decline, according to Beverage Digest.

This surge however has lead to a closer examination of the industry. Lawmakers and consumer advocacy groups have called on the Food and Drug Administration to investigate the safety of the drink, which are especially popular with younger people.