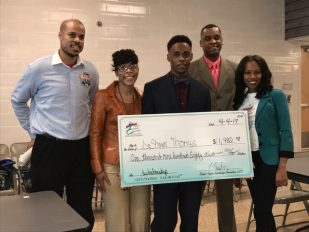 In 1982, a man was gunned down in Chicago. He was the father of former CNN executive Tenisha Taylor Bell, now CEO of the Ezekiel Taylor Scholarship Foundation, which is named after him.

The foundation provides scholarships of up to $3,000 to young black men in Chicago–but not necessarily A or B students, Bell insists. “I’m targeting the very young men who are being targeted by the gangs,â€ she told me. “This is the group that took my father’s life.â€

Inspired by Chance the Rapper

Bell’s volunteer-run organization, which is about a year old, provides scholarships to young black men on their way to some form of education post-high school. It doesn’t have to be a four-year college; ETSF funds can also be used at trade schools.

When Chance the Rapper recently donated $1 million to the Chicago Public Schools, whose seemingly intractable fiscal problems have been in the news for some time, he inspired Bell to go public with the awarding of ETSF’s first scholarship.

“I didn’t want to do this quietly. I wanted to shine a light on the good and encourage others by my example, as Chance the Rapper had encouraged me,â€ Bell told me. “I want others to see that they too can become part of the solution.â€

On Tuesday, April 4, ETSF awarded its first scholarship in the amount of $1,982 (the year Bell’s father was killed) to a college-bound high school senior, DeShawn Thomas.

Thomas, 18, won the ETSF essay contest on the topic “Stop the Violence.â€ He plans to study computer engineering and business administration at Central State University, a historically black college in Ohio.

Thomas attends South Shore International College Prep High School, which approached ETSF with the idea for the essay contest. The school is situated in a neighborhood where seven people were killed last week.

Bell says the violence is a community problem, and that it will take the community to solve it. That’s why it was important to her to publicly award the scholarship to Thomas.

“Each of us can do something,â€ she says, echoing Chance the Rapper’s call to Chicago citizens to do their part. “We need to keep telling the positive story.â€