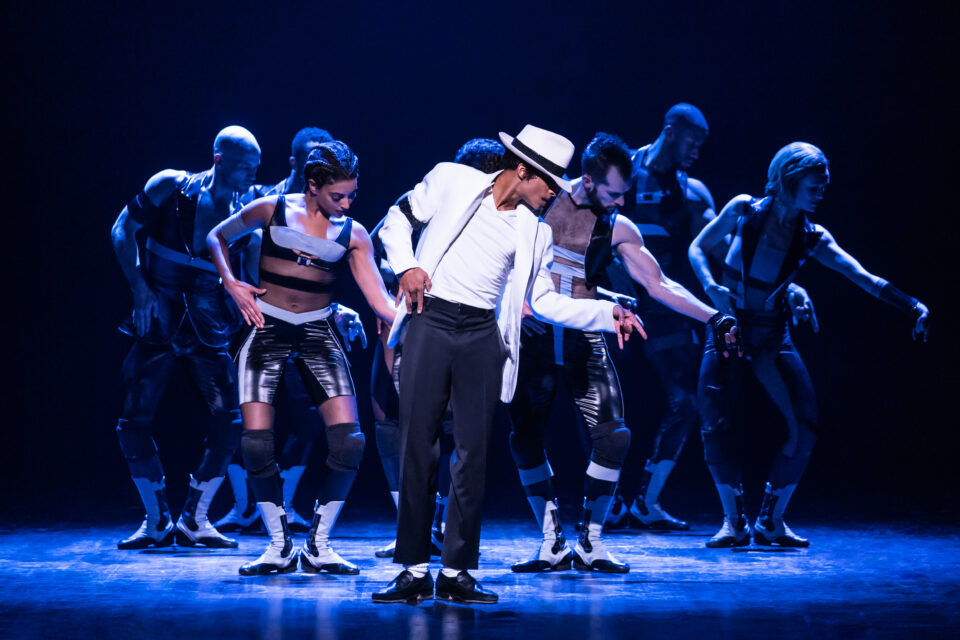 When Myles Frost stepped into the iconic penny loafers of Michael Jackson to portray him in the highly successful MJ: The Musical, it would have intimidated any newcomer to the Great White Way.

Yet, Frost, who lacked formal training in musical theater and never had aspirations of becoming a Broadway performer, directed whatever anxiety he had when he landed the role of Michael Jackson by completely immersing himself in studying the late great entertainer for six months.

As an admirer of Jackson, Frost performed “Billie Jean” at his Thomas Wootton High School talent show in 2016. Watching in the audience, his mother recorded his performance on her iPad and uploaded the footage to YouTube; unknowingly, her simple and supportive move would catalyze Frost’s career trajectory.

Five years later, while studying music technology as a junior at Bowie State University, a historically Black college in Maryland, he received a call from his acting coach, who had shared Frost’s video with the musical director for MJ, Jason Michael Webb.

“The morning of my sister’s birthday, May 27 of last year, I get a call from my acting coach, Lelund Durond Thompson, who I really [had] just met around that time,” Frost said on Sway’s Universe.

“He goes, man, I got to tell you, I woke up this morning with something on my heart, and something just told me to look [up] your name on YouTube, and the first thing that popped up was Myles Frost doing ‘Billie Jean.’”

The conversation proved serendipitous as Thompson told him about a potential opportunity he “would be [a] perfect” fit for. Frost assured his acting instructor that he could execute Jackson’s signature moves. What Frost did not tell Thompson was that he had not danced in the last five years, but he did not allow that to deter him from what ended up becoming a life-altering moment.

Through a series of tryouts, Frost landed the coveted role and immediately consumed a copious amount of research about Jackson. He learned the famed pop star’s moves, the intention, meaning, and attitude behind his every anti-gravity lean, toe stand, kick, and, of course, the legendary Moonwalk.

“With me working with Rich and Tone Talauega, who danced with Michael from the HIStory World Tour all the way up until he passed,” Frost tells BLACK ENTERPRISE and continues, “You start to learn his reasoning for his sharpness, his intensity; you start to learn about who he gets his inspirations from, and when he performs, he plays his music at double time, and why they are so much faster than the record, that’s something that James Brown did.” He learned a great deal from the brothers regarding movement, replicating Jackson’s voice, but his biggest challenge was honing the King of Pop’s frame of mind.

“It is one thing to be able to execute the moves, which is what a lot of impersonators do. But to know what moves belong where and in what song, each song is essentially a different character.

Theater critics and fans have raved over Frost’s authentic and honest depiction of Jackson, which stems from how much he related to the musical genius who publicly spoke about his troubling childhood. However, the Broadway production does not explore Jackson’s tarnished legacy due to allegations of child abuse. According to The New York Times, Frost wants people to leave the theater with a deeper understanding of the best-selling entertainer and the dedication he put into his career to reach the upper echelons of global stardom.

Frost is working toward becoming a recording music artist, and like Jackson, he gleans inspiration from other artists and empathizes with Jackson’s relationship with his father and mother.

“That was the start of me feeling so connected to the role,” he says.

“When I’m in certain scenes and interacting with Joseph, those are emotions and feelings that I’m pulling from my personal life.”

The Tony Award winner admits he doesn’t look forward to tapping into those distressing emotions eight times a week, yet he welcomes the chance for the audience to get a glimpse of who he is as a person. In addition, to allowing theatergoers to learn more about him through the lens of Jackson, Frost also had to master maintaining his health and wellness to uphold the rigorous schedule of acting, singing, and dancing on stage at an intense level.

The payoff for all his sacrifice was Frost winning the Tony Award for Best Performance by a Leading Actor in a Musical, the youngest winner in this category in the history of the award show.

“It was the most calm, crazy moment of my life because I went into it not expecting anything,” confessing he never watched the Tony’s and relished in the new experience with his mother and sister, which meant more to him than the recognition.

Today, most fans will celebrate Jackson’s 64th birthday and music. Frost says he doesn’t have a favorite song because he deeply respects and loves each of Jackson’s bops. However, he names his top three songs from the 13-time Grammy-winning artist’s anthology as: “Rock With You,” “Heaven Can Wait,” and “Billie Jean” because of its sentimental value.

As Frost continues to dazzle fans with the musical, he plans to release original music in the future.

“When it’s time to come out, and I know it’s something that the world is going to be super excited about,” he confidently announces.