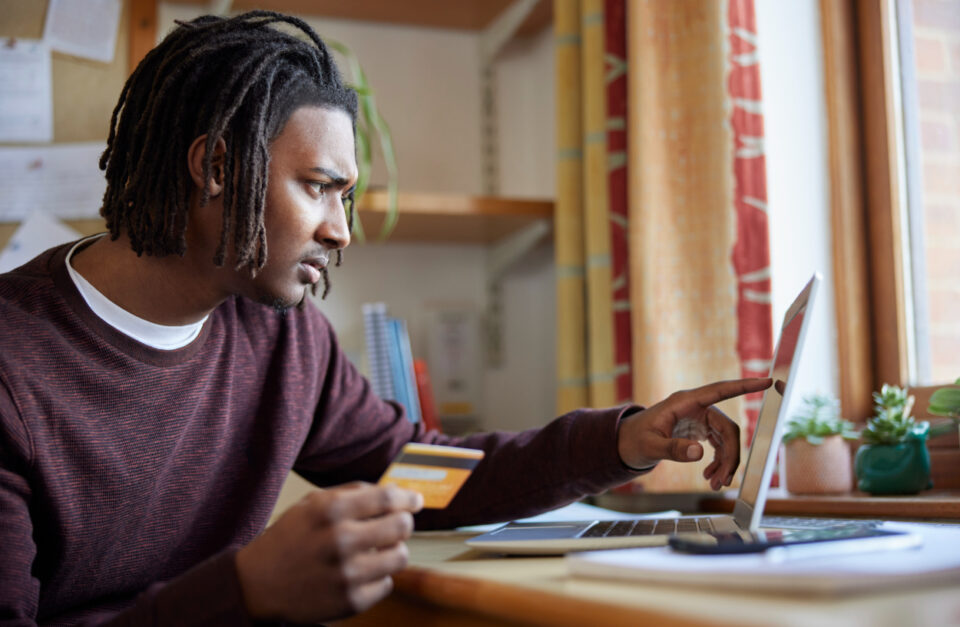 (Image by Daisy-Daisy via iStock). Male University Or College Student With Credit Card Looking At Laptop Worried About Debt At Desk In Room.

The National Association for the Advancement of Colored People (NAACP) has a request for President Joe Biden: cancel a large portion of student debt for Black Americans.

Biden is anticipated to decide on broadening a pause on student loan debt payments or issue some type of cancellation by Aug. 31, when the existing ban ends.

Yet, leaders of the nation’s most elite advocacy and social justice organization have stated another extension on repayments would not be enough to remove the problem. Last month, it was disclosed Biden is considering another extension on the federal student loan payment pause among options. White House officials have since indicated Biden is taking the matter seriously and will decide by the end of this month.

NAACP President and CEO Derrick Johnson addressed the issue in a letter to Biden last week, per MSN.

“Any extension must be accompanied by meaningful cancellation,” he wrote, per Insider.

“We urge you to cancel a minimum of $50,000 as Black borrowers — drowning in an average of $53,000 in student debt — have virtually no realistic way to pay it back in today’s unjust economy.”

Black student debt perhaps is even higher. The average amount of student loans for the individuals surveyed carries $79,535 versus $126,993 for all respondents based on new research from Real Estate Witch. Those polled closely mirror Blacks making up roughly 12-14% of the U.S. population.

Hundreds of Black borrowers equate the student debt owed to “Jim Crow,” which makes racial inequality more intense. Based on a new report by The Education Trust, those Blacks report that policymakers have disregarded the racial and economic evidence of inequality in student loan debt, with most contending that erasing all such obligations is the best way to solve the ongoing problem.

It has been reported the latest figures for 2022, all told, reveal roughly 45 million borrowers owe around $1.7 trillion in student loan debt. That supposedly makes student loans the second highest type of consumer debt after mortgage debt and greater than what is owed for credit cards and auto loans.

According to MSN, the NCCAP’s stance was reinforced by Wisdom Cole, its national director of youth and college.

“Black borrowers are physically impacted by the weight that student debt has.”

What possible political implications could emerge if the student debt is not discarded?

According to Yahoo News, Cole cautioned that if that does not happen, it could make it difficult for Biden to win the presidential election two years from now.

He stated, “I think if Biden doesn’t cancel student debt during this term, it’s going to be hard to rally folks around him, particularly young Black folks.”