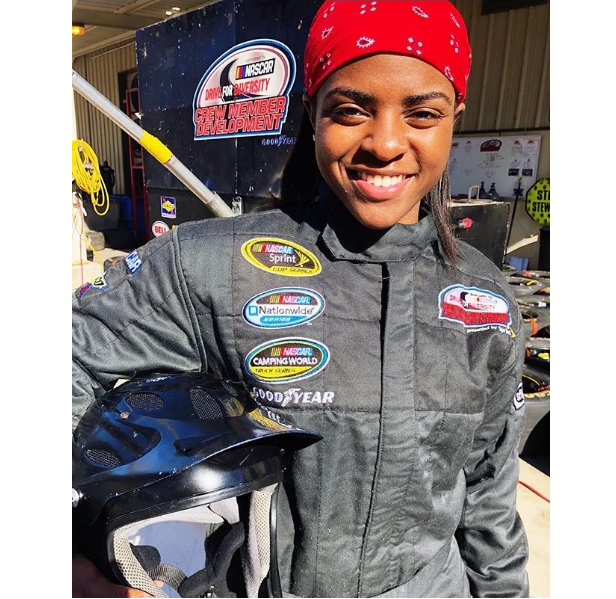 Daniels officially began changing tires in the pit box last June and recently worked at the Daytona 500 in Florida and the Rinnai 250, a NASCAR Xfinity Series race in Georgia. Not only had she never imagined making history, she also never aspired to work in the auto-racing industry.

“I was never a NASCAR fan, it wasn’t even a thought,” said the former Norfolk State University basketball player, reports FOX 46. “It was just basketball, track and that’s it.”

However, her life took an unexpected turn after a friend encouraged her to sign up for a NASCAR diversity recruitment initiative during her senior year in college. “I found myself not doing anything, I was at the end of my internship, end of basketball, so I was like, ‘why not?’” She added that the initial tryout was “tough,” but “I ended up beating some of the boys I went against, so I’m like I know I did good.”

In fact, Daniels did so well that she was invited to join the National Drive for Diversity Pit Crew Combine, a program that recruits and trains women and minority athletes. Once again, she excelled, placing in the top 10 and landing the opportunity to train to become a professional pit crew member. That’s where she discovered her aptness to be a tire changer. “That’s the position that suits me best because I’m low to the ground and have good hand-eye coordination.”

Shortly after completing the training program, Daniels became the first African American woman to pit a vehicle in both the Xfinity Series and Camping World Truck Series in 2017. Now, she’s using her inspirational story to empower others.

“I would just tell everyone out there to just follow your heart,” she said Tuesday during an appearance on ESPN’s Outside the Lines. “I know, you know, just thinking about me coming into NASCAR, I had my thoughts, you know, like of what people might think of me or I might not be accepted. But you just have to overcome those thoughts and those feelings and just do what’s in your heart and just trust the process.”