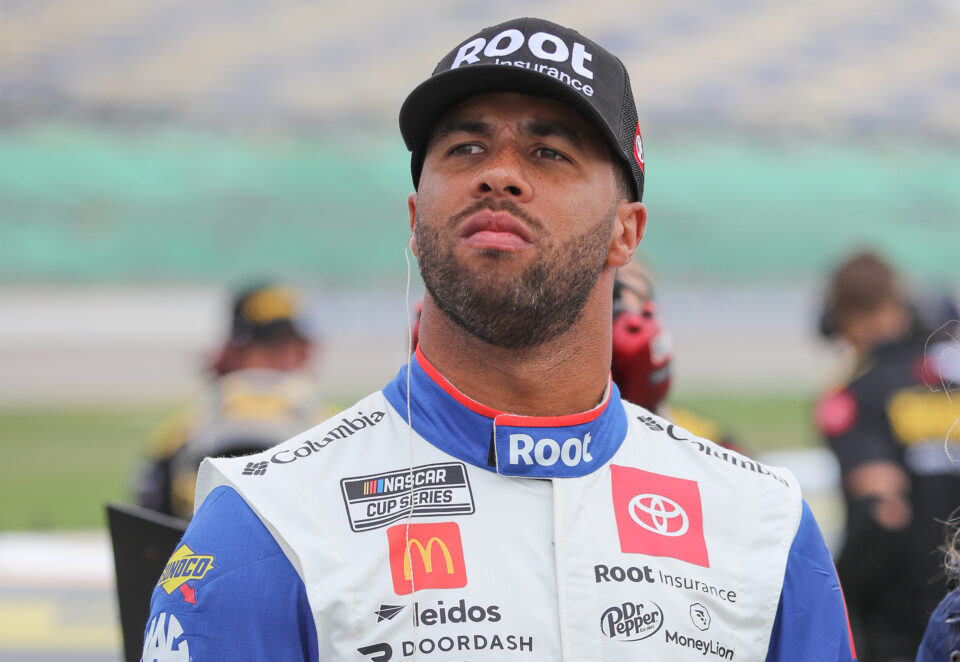 Leading the pack, Wallace was just 14 laps in Stage 2 when his No. 45 Toyota collided into the wall at the hands of Hendrick Motorsports racer Kyle Larson on Sunday, Oct. 16, according to The Sporting News. The run-in resulted in Wallace returning a slight bump that sent Larson’s No. 5 Chevy toward the infield.

At high speed, Wallace tailed behind Larson to the edge of the infield grass and smashed into Larson’s right rear with the left front of his vehicle. The pair spun back onto the track, involving championship contender, Christopher Bell. All three drivers were knocked out of Sunday’s race.

Wallace spins him out, and #NASCARPlayoffs driver Christopher Bell is involved! pic.twitter.com/TlxcEV5T6q

Shortly after, a heated Wallace approached Larson on the infield with some fuming words and hard shoves. An on-track official immediately diffused the altercation by separating the pair.

For Wallace, his actions on-track were in response to Larson’s attempt to make a three-car dive bomb without clearing the move with him first.

Hear from @BubbaWallace after his incident with Kyle Larson. #NASCAR pic.twitter.com/XUMPs2sRsf

Larson told NBC that Wallace “had a reason to be mad, but his race wasn’t over until he retaliated.”

NASCAR’s chief operating officer, Steve O’Donnell, made a statement with SiriusXM NASCAR Radio after the one-race ban was announced, per ESPN.

“As we look at the sport and where we are today and where we want to draw that line going forward, we thought that [Wallace] definitely crossed the line, and that’s what we focused on in terms of making this call,” he said.

On Monday, Oct. 17, Wallace issued a public apology to reflect on Sunday’s actions.

“I want to apologize to NASCAR and the fans, along with Christopher Bell, Joe Gibba Racing, and Toyota for putting them in a situation in the Playoffs that they do not deserve,” Wallace wrote in part.

Wallace’s NASCAR journey has been no easy ride. Yet, it has been trailblazing. Back in 2021, he made history as the first Black driver since 1963 to win a NASCAR Cup Series race at the Talladega Superspeedway. The historic victory came after his outspoken efforts to shed light on social justice by pushing NASCAR to ban the Confederate flag and driving in a Black Lives Matter stockcar during a cap series race.