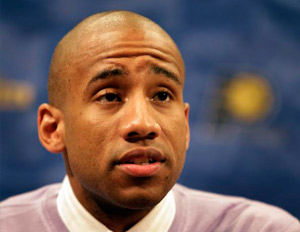 First it was the NFL, now it’s the NBA that’s threatening to force their fans to find another hobby rather than watching hoops during the week. With the dark cloud of a work stoppage hovering over the league, players are preparing for a life outside of basketball this season. While some of the NBA’s elite are financially secure and looking over opportunities to play overseas, not all of the players in the league are afforded that luxury.

BlackEnterprise.com sat down with Indiana Pacers guard Dahntay Jones to discuss exactly what’s going on with the lockout, what his plans are if there is no basketball season, and how his basketball wife, Valeshia Butterfield, is helping him with alternative career plans.

BlackEnterprise.com: Can you give some insight into what’s going on right now with the NBA and the lockout?

Dahntay Jones: As of right now, we’re far apart when it comes to reaching an agreement. It’s about revenue sharing; if big teams should share with little teams and should owners claim that they’re losing this gigantic amount of money. They want us to take the bigger hit because of our salaries and we don’t think that’s the problem. We think we can come to an agreement, but we started so far apart that it’s hard to find a middle ground. We’re not even close to landing a deal. For any normal worker, no matter what your wage is, whether it’s $2 or $2 million, if I come and tell you that we’re cutting your salary in half, you’re going to be upset.

It sounds like the owners want the players to pay for their mistakes.

They don’t want to take responsibility for the steps they’ve taken to get where they are. You have a small market team like San Antonio that wins and makes money. But then you have larger markets that make riskier decisions and lose money. We don’t think the whole NBA is losing money but they don’t want to show us any of their books, so we can’t really be sympathetic to that. If I told you I was losing money I’d just show you everything that I’m losing. Not just part of it and say they I can’t show you the rest.

What’s your response to outside skeptics that say, “Who are you to complain when you make millions playing basketball?â€

The reality is that a majority of players don’t make an exorbitant amount of money. It may be more money than most have but it’s not a drastic amount of money. You try to make that money work on several different levels and guys are just trying to stay financially secure and take care of their families. Our careers are only for a short period time. A normal worker can work 30-40 years and we work a maximum of 10, with the league average being five. We have to make this money stretch out.