Neil deGrasse Tyson Opens Up About His Experiences with Police 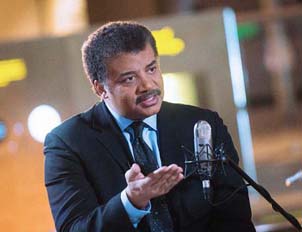 Science superstar Neil deGrasse Tyson posted a chapter on Facebook from his 2004 biography,Â The Sky Is Not the Limit: Adventures of an Urban Astrophysicist,Â which recounts several instances when he and other black scientists were stopped or harassed by police for seemingly trivial matters.

There was the time I was stopped late at night at an underpass on an empty road in New Jersey for having changed lanes without signaling. The officer told me to get out of my car and questioned me for ten minutes around back with the bright head lights of his squad car illuminating my face.

I had been stopped by the police while transporting my home supply of physics textbooks into my newly assigned office in graduate school. They had stopped me at the entrance to the physics building where they asked accusatory questions about what I was doing.

During a National Society of Black Physicists conference, deGrasse Tyson remembers how he, along with other black scientists, were engaged in geeky banter, musing over issues concerning the laws of physics and the teleporter on Star Trek and why some brands of soda cans float to the top of a cooler with melted ice, while others sink.

The conversation took a more somber tone after one scientist mentioned he had been stopped by the police.Â One-by-one, the other physicists relayed their police encounters:

One of my colleagues had been stopped for driving too slowly. He was admiring the local flora as he drove through a New England town in the autumn. Another had been stopped because he was speeding, but only by five miles per hour. He was questioned and then released without getting a ticket. Still another colleague had been stopped and questioned for jogging down the street late at night.

A particularly harrowing account in deGrasse Tyson’s recollection is when he gave a keynote address right after Rodney King was beaten by police officers in Los Angeles in 1991. The riots that followed served as a backdrop to the event:

While watching the helicopter news coverage of the fires and violence that broke out that morning, I had a surreal revelation: the news headlines were dominated by black people rioting, and not by black scientists presenting their latest research on the frontiers of physics.