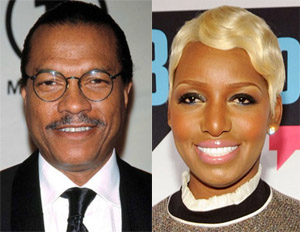 Leakes, 46, has been a leading cast member on Bravo TV’s The Real Housewives of Atlanta since 2008, has authored a book about her life and has been featured on shows including Glee and The New Normal. She is also an entrepreneur, having started her own production company, NeNe Leakes Production True Entertainment.

Her partner will be Tony Dovolani, an Albanian professional dancer and champion of Dancing with the Stars: All Stars.

Williams, 76, is known for his roles as the suave love interest of stars including Diana Ross, has appeared in top sitcoms including A Different World, and was a successful jazz singer in the ’60s. He gained a major science fiction and comic following after his roles in two Star Wars films and Batman.

He will be dancing with Emma Slater, a professional dancer and choreographer from England who has appeared in 2008 film Mama Mia!.