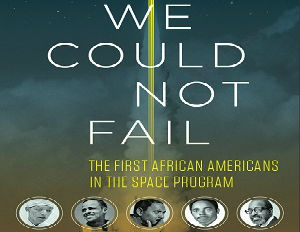 A newly released book profiles 10 African American space workers who were pioneers in their field.

[Related: The First Instagram Selfie From Space is Pretty Awesome]

We Could Not Fail: The First African Americans in the Space Program details the stories of technicians, mathematicians, engineers and an astronaut candidate who entered into the Space Age during the early 1960s–some of the peak years of the civil rights movement. The book, written by Richard Paul and Steven Moss, “tells an inspiring, largely unknown story of how the space program served as a launching pad for a more integrated America,â€ according to the publisher’s website.

NASA, which has committing more contracts to small businesses in recent years and whose former employee came up with a series of diverse emojis, was utilized by Presidents John F. Kennedy and Lyndon Johnson “as an agent for social change, using federal equal employment opportunity laws to open workplaces at NASA and NASA contractors to African Americans while creating thousands of research and technology jobs in the Deep South to ameliorate poverty,â€ the website adds.

Below is an excerpt from the book:

Portrayals of the early space programs suggest they were an almost thoroughly white endeavor with no input from or impact on African Americans. NASA was German rocket scientists commanding legions of white American technicians, preparing and controlling capsules manned by jocular white fighter pilots and stoic white engineers. According to Konrad Dannenberg, a deputy to Wernher von Braun, the director of Marshall Space Flight Center (MSFC) in Alabama, “I am not aware of any high-level colored people who became part of the team.” Make no mistake, however. African Americans were there, and their presence had an impact.â€

While it is true that African Americans went to work elsewhere in the federal workforce, no other federal agency existed because of and for the Space Age, and no other component of the federal government enjoyed the romantic hyperbole associated with NASA in the early years of its human spaceflight program. The front pages of the black press portrayed African Americans working for the space program in the early 1960s as heroes. That did not happen to people working at the General Services Administration or the post office. The image making rubbed off. As Morgan Watson, one of NASA’s first black engineers, put it, “to be selected to participate at NASA was certainly a thing of pride.”

This excerpt from We Could Not Fail: The First African Americans in the Space Program (Copyright Â© 2015 by Richard Paul and Steven Moss) is used by permission of the University of Texas Press. For more information visit www.utexaspress.com.