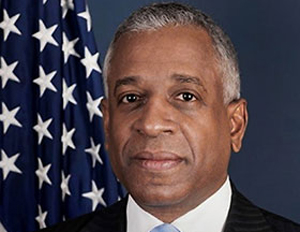 According to reports, the NFL is set to hire B. Todd Jones to oversee player discipline as discipline officer. Jones, who recently resigned as the Director of the Bureau of Alcohol, Tobacco, Firearms and Explosives (ATF), will be in charge of the league’s new personal conduct policy which was adopted in December 2014. His new post will also include fining and suspending violators of the conduct policy.

After a tumultuous 2014 NFL season filled with several high-profile issues involving player conduct, and the process the NFL used to conduct investigations, Commissioner Roger Goodell is reported to be taking proactive measures.

Also in December, Goodell told reporters that the league would hire someone to handle investigations of player misconduct and discipline. These duties will now be split between Lisa Friel, head of the NFL’s Special Counsel for Investigation and Jones.

Goodell was heavily criticized for his handling of former Baltimore Ravens running back Ray Rice and the NFL investigative process. The Rice case and others involving players including Minnesota Vikings running back Adrian Peterson and Greg Hardy of the Dallas Cowboys led to a stronger policy with an automatic six-game suspension for domestic violence offenses.

Jones, a 57-year-old former Marine, will leave his ATF post in about two weeks, sources said.

Daron Pressley (@daronpressley) is an entrepreneur and former Fortune 500 sales and marketing executive who has been featured on outlets including Fox45 News, Black Enterprise magazine, and The Washington Post. Knowledgeable in marketing and branding, Pressley works with professional athletes, organizations, and individuals to develop strategies to create, build, and grow brands. As a speaker, Pressley has reached more than 20,000 students. He also provides dynamic insights on leadership and branding via his Website:Â DaronPressley.com.