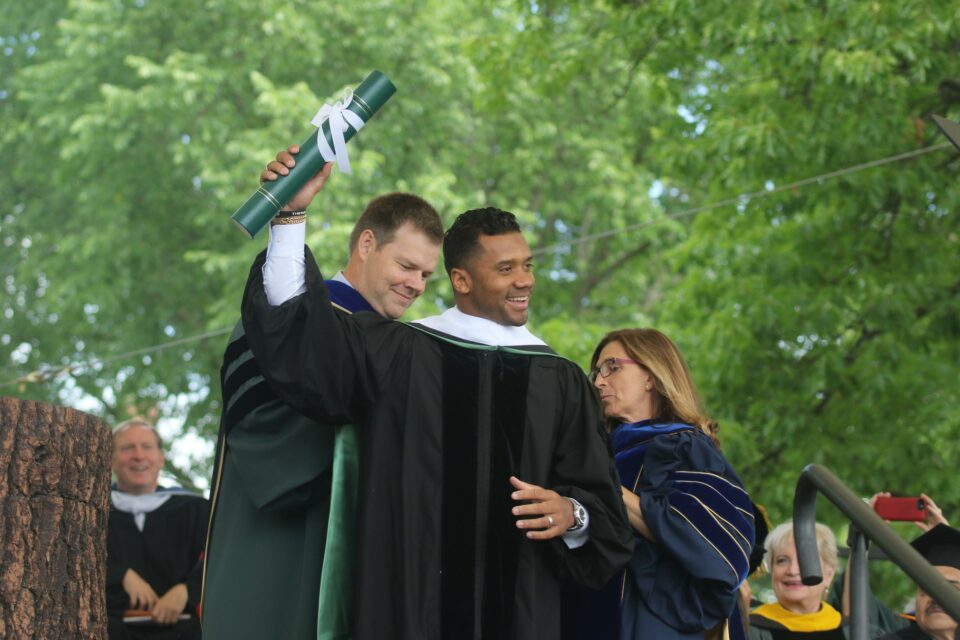 This powerful mantra was the premise of his 2022 commencement address before Dartmouth President Philip J. Hanlon awarded the Broncos star an honorary degree.

Dartmouth College announced on commencement day, Sunday, June 12, that its institution was proud to bestow Wilson with an honorary degree of Doctor of Humane Letters. The award celebrates the honoree’s many accomplishments as well as his dedication to serving others.

“For your poise, leadership, and sportsmanship, both on and off the field, for your commitment to improving the lives of others, and for your belief in the power of positivity in helping people reach their full potential, Dartmouth is proud to award you the honorary degree of Doctor of Humane Letters,” according to a written statement from the college’s office of communications.

Commencement day brought an even more special tune as his late father, Harrison Benjamin Wilson III, was an alumnus of the Ivy League institution, as well as three of his uncles. In his speech, Wilson introduces the 2022 graduates to his shining example dad who “played two sports in college, football and baseball, just like me.”

“Now, legacy might seem like a strange topic for a commencement speech,” Wilson said to the Class of 2022. “I mean, this is your BEGINNING. You’re just starting out.”

“But graduates, if there’s one thing I hope to accomplish today, it’s to challenge you not to wait to think about what your legacy will be. Because legacy isn’t just something you leave behind. It’s something you build. Something you add to, every day.”

“My dad… he didn’t get as many days as he deserved. I miss him so much. But because he lived with legacy, he’s never really gone. I hear his voice all the time,” Wilson continued before sharing a story about him and his father traveling to Peyton Manning Passing Academy, in Thibodaux, Louisiana.

Super Bowl-winning quarterback Wilson, who is married to singer Ciara, was traded from the Seattle Seahawks to the Denver Broncos in March 2022, BLACK ENTERPRISE previously reported. As Dartmouth mentioned, Wilson is an innovative entrepreneur and community leader.

In 2014, Wilson started a media and production company called West2East Empire “to impact the world through storytelling.” He and his wife launched The Why Not You Foundation, raising over $10 million for pediatric cancer research in 2014 and “provided underprivileged youth around the Seattle area with expanded educational opportunities,” as per Dartmouth’s statement.

In addition, Wilson serves as an investor and co-owner of the Portland Diamond Project, a collaborative movement creating employment opportunities, expanding transportation options, adding great public spaces, and more, per the company website.

In 2021, Wilson established the Why Not You Academy, a tuition-free charter school that prepares students for success in college, career, and civic life. He and his wife also published an inspirational picture book titled Why Not You? which aims to empower children of all ages to see the value in themselves and actively pursue their biggest dreams.