Hello, Nicki Minaj: It's Best to Make Allies with Pros, Not Enemies 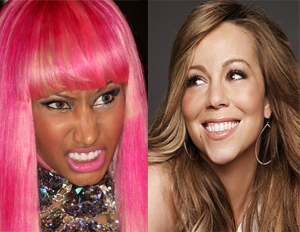 It’s always sad to see two women—especially women of color—go at it, whether it’s on reality TV or in the ‘hood on the street. We can’t just be great and coexist.

With the latest news (and video footage) ofÂ Nicki Minaj screaming obscenities at a music industry great, Mariah Carey, I’m prompted to think about the major gap that can exist between the young and the seasoned, the babies and the Boomers, the innovators and the foundation layers.

Carey has sold millions, won almost every major music award thinkable, collaborated with other industry heavyweights. She’s a mother and a wife. Her songs have gained prime positions in international karaoke rosters and wedding mixes and have become the soundtrack for generations.

But, so has Minaj. Platinum records? Check. Soundtrack of a generation? Check. Major music and cultural movement (whether you support or agree with it or not)? Check. (Oh, and let’s not forget the Barbz and other supporters who make up more than 30 million on Twitter and Facebook combined).

According toÂ reports, the incident was sparked after the two disagreed on a critique that was made about an American Idol hopeful’s performance in North Carolina. There’s even word that executives worry that the two cannot work together on the show at all.

I think many young bosses face this same tug of war with elders in the everyday workplace. As young professionals, many of us have those moments where we just want to pop off after an ignored proposal, a disregard of experience and an uber-emphasis on the newbie factor. We want to force people to respect our skills and hustle.

But before doing that, pump the breaks a bit. As a newbie to the game—whether a celebrity or entry-level/mid-level employee—I think it’s best to take the high road when going toe-to-toe with power players in your industry. As I watched the footage, my first thought was not, “Well, maybe Mariah disrespected her.” It was more, “Nicki, this isn’t a good look for you. What bridges have you burned after doing this? What prospective fans, opportunities or endorsements could be in jeopardy? Would Usher have done this to Michael? Beyonce to Diana? Heck, Fantasia to Betty Wright?”

People earn benefit of the doubt, loyalty and prestige after decades of hits, experience and utter star power — whether they’re in the wrong or not. In the professional world, the same can apply. A young, very promising talent could be derailed and utterly branded for the life of their career if they can’t appropriately handle conflict or dissent that may occur with a senior manager or peer.

As young professionals, we all want to pop off when we feel ignored, screwed over or just annoyed by the efforts of anyone— let alone an elder. But the deck is definitely more in their favor, so it’s best to Woo-sah, trust in your own greatness, and make boss moves that ensure you’ll have advocates, not enemies.