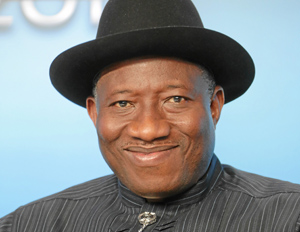 The website Richest Lifestyle is feeling the wrath of Goodluck Jonathan, the president of Nigeria.

In a recent article the website published its list of Africa’s richest rulers and ranked Jonathan sixth, with a net worth of $100 million.

According to sources, Jonathan was incensed.

Jonathan’s office, Aso Rock Presidential Villa, in Abuja took offense at the ranking, saying it had no “factual basis” for it and was an attempt to portray Jonathan as corrupt.

“We have noted with consternation the listing of President Goodluck Ebele Jonathan by a website — RichestLifestyle.com – as the sixth richest African president with an estimated net worth of $100 million U.S. Â dollars.” Abati goes on to say, “The presidency condemns the totally unwarranted inclusion of President Jonathan in the publication titled “Africa’s Richest Presidents 2014â€ as another attempt to unjustifiably portray the Â president as a corrupt leader and incite public disaffection against him.”

The site has since backed down and removed from the list the name of the president of Africa’s most populous nation.

Jonathan is running for re-election in Nigeria’s 2015 presidential election. His office says, “The clear and unacceptable imputation of the claim that President Jonathan is now worth about $100 million is that the president has corruptly enriched himself while in office which is certainly not the case.”

Jonathan has spent four years in office as the elected president. His office calls him a lifelong public servant who has held public office since 1999 and has regularly declared his assets as required by Nigerian law. According to Abati, Jonathan has received no personal income since 1999 other than his salaries as “deputy governor, governor, vice president, acting president, and president which are matters of public record.”

Abati says, “There has been no significant variation in the totality of his personal assets as contained in his last declaration to the Nigerian Code of Conduct Bureau in 2011 which, as can be verified, was a very, very far cry from the $100 million figure now being bandied about by RichestLifestyle.com and other irresponsible, copycat publications.”

Jonathan’s office is demanding a “retraction and an unreserved apology from RichestLifestyle.com and all those who have reproduced the offensive article. Otherwise, they should be prepared to substantiate their libelous claims against the president in courts of law within and outside Nigeria.”

African rulers have long been portrayed as corrupt politicians who use their power and influence to fleece their respective nations and empower their friends and family.

Some have questioned the article’s authenticity because of the difficulties and complications obtaining the exact number or source of wealth of Africa’s leaders.

Jonathan was ranked alongside Swaziland’s King Mswati III as worth $100 million.

The website ranked Jose Eduardo dos Santos, the president of Angola, as Africa’s richest ruler with a net worth of $20 billion.

His daughter Isabel has been ranked Africa’s richest woman by Forbes. She’s also the richest black woman in the world.

Richest Lifestyle says the list was “compiled based on information from Forbes.com, ForeignPolicy.com, CelebrityNetWorth.com, and Cabinda.net.”