Nomadness Travel Tribe Continue Their Quest Around The World 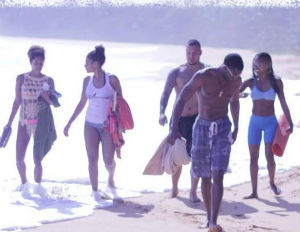 At this point there are literally only a handful of places in the world that, collectively, the members of Nomadness Travel Tribe have not been to.

That’s right, those other roughly 185 other independent countries and territories?

Been there, done that.

A crew of more than 4,500 primarily young black and Latin women and men who have made globe-trotting a life mission, members — who range in age from 20 to 60 and organize meet-ups in places as far away as Moscow and Cape Town — pride themselves on traveling far beyond the Caribbean and into some of the furthest corners of the earth. And when they are there chances are they aren’t sunbathing: on the group’s private Facebook page folks constantly one-up each other with tales of their greatest adventures — jumping off the longest and highest suspension bridge in Switzerland; getting a snake massage in Israel; swimming with whale sharks in Honduras; running with the bulls in Panama.

This high-octave, thrill-seeking travel posse — which takes organized jaunts together several times a year — was conceived by 20-something founder and hostess Evita Turquoise Robinson a little over a year and a half ago, after she found herself feeling a bit lonely as the only black face she’d see for weeks while carrying out a teaching assignment in Japan. Void of opportunities to interact with many other travelers of color, she sprung into action — creating a group that visually and culturally reflected her interests.

“I couldn’t find a community where I felt I could be 100% myself,â€ explains the Bronx native, whose five-member team just wrapped up a nearly three-week cross-country RV tour meant to raise awareness about the benefits of international travel at some of the nation’s premier historically Black colleges and universities. “There was not a representation of people like me in the places I was visiting, and that prompted me to start my own [travel] family,â€ says Robinson, who also manages the Nomadness Travel Tribe blog.

To fund her dream and to keep her crew mobile Robinson organizes specialized tours all over the world, where, through a lottery-type system, a select number of members pay an average of just $300 for a slot on one of the Tribe’s generally week-long exclusive trips. The fee includes a bed in a rented house in each designated country, as well as a stake in any of the group’s planned activities. A modest surcharge goes toward Tribe administrative fees. Members — many of them frequent flier members or owners of buddy or companion passes — organize their own flights.

“So far small groups of us have traveled to Panama, Brazil, India, Berlin, Panama, Spain and other places together — we’ll be in Bali for New Years,â€ says the 2006 Iona College grad.

She has high hopes for the group’s potential to help encourage more people of color — particularly men — to travel.

“My overall intention for the Tribe is to provide a home for the underrepresented in the travel industry,â€ she says. “Our demographic is 90% black and Latino travelers. We have an 80% female demographic, and we’re looking to boost the number of men. There are over 6,000 passports represented within our group. And many of our people are either solo travelers or currently living as ex-patriots.â€

“I want us to be at the forefront of travel on many different levels,â€ she says. “Our goal is to get our own television series, and we have a pitch in front of a network right now. We can also accomplish some of our goals through merchandising — I already produce t-shirts, sweatshirts and other items, but I’d like them to be sold in stores. And I’d like for us to continue traveling to colleges and universities, which we were able to do last month via our third, pretty successful Kickstarter campaign,â€ says Robinson.

Though she has no formal financial background (rather her degree is in television production) Robinson says she has several business-savvy mentors, including family members who are entrepreneurs. She’s also hustled her way into getting media sponsorships (Hotels.com and YRB Magazine supported the RV tour) to get to where she wants to go.

“My first year with Nomadness was about building the foundation,” she says. “This year it’s about getting as many eyes on it as possible so that we can take it to the next level.â€