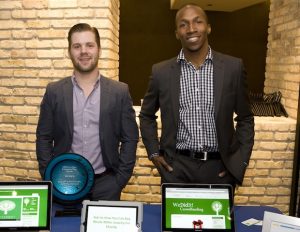 “Mr. Edmond, can you get me connected with George Fraser?,” the gentleman asks. “We’d just love to get him as a speaker for our fundraising gala! Of course, we can’t pay him or cover his travel, lodging, meals or other expenses. We’re a non-profit organization.”

I want to tell him that viable non-profits budget for speaker fees for their fundraisers, pricing tickets and selling sponsorships to cover that and other expenses and leaving a tidy sum to support their cause. I want to say that Fraser has his own causes to support, ones no less worthy than that of this gentlemen, a perfect stranger. I want to tell him that the point of booking a speaker like Fraser is not to get him for free, but to market the heck out his headlining the fundraiser, in order to sell out and guarantee a profit. But I don’t want to offend or give the impression that I don’t care about his cause, so instead I suggest he e-mail Fraser directly. (I can be such a wuss sometimes.)

Please, don’t take this the wrong way. But the non-profit industry does not need more organizations that are charity cases themselves. This doesn’t seem like a very polite or compassionate thing to say to people with a good heart and a worthy cause, but no clue of how to build or manage a sustainable non-profit. So I usually bite my tongue when I meet people who think that the worthiness of their cause exempts them from such responsibilities as business planning, market research, sustainable income generation and profitability.

The truth is that there are too many unprofitable–meaning unsustainable–nonprofits. In too many cases, you have several organizations trying to address the same problems in a given community, competing instead of collaborating for attention and resources, fighting for the same corporate sponsorships, foundation grants and wealthy individual donors. Often, a nonprofit exists simply because its founder(s) thought it better to start their own 501c3 to address a need–such as help for those suffering from AIDS or mentoring programs for at-risk Black males–than to volunteer time, money, energy and resources to existing non-profits serving the exact same causes. And yes, in some cases, it’s about ego–if I start my own non-profit, I–not those people in that other neighborhood doing basically the same thing–get final say about what we do or don’t do, as well as the credit for the results. (Because I clearly care more than they do.)

As a result, too many non-profits have a hard time justifying their own existence in the marketplace, so they fall back on the worthiness of their particular cause and the desperate need of those they passionately desire to serve. In other words, they use guilt to garner support. But here’s the problem with that: worthiness is in the eye of the beholder, and the marketplace is crowded–even saturated–with worthy causes.Â  A good cause alone is not enough of a unique selling proposition to compete effectively.

I can hear some of our passionate do-gooders now: “Competition? Business planning? Profit models? Unique selling proposition? We’re not in business trying to make money! We’re a non-profit organization serving a cause!”

News flash: You’re either both, or you’re neither. Both for-profit entrepreneur and not-for-profit founder need a profit motive. The only difference is that the former wants to grow her business and enrich herself, while the latter wants to finance the services being offered by his charity and sustain the staff, administration and other resources necessary to do it. (Hopefully in that order; a charity that spends the majority of its resources on the latter is inefficient at best, criminal at worst.) Simply put, if you can’t make money, you can’t finance your mission.

If you are intent on starting a non-profit organization, or you already have, ask yourself: If you had to make a case for investing in your organization in a Shark Tank type business plan competition, how would you fare? I know of at least one non-profit focused business that passed that test with flying colors: We Did It, a Brooklyn-based crowd-funding platform for non-profits. We Did It Co-Founders Benjamin Lamson and Sulaiman Sunni were among more than a dozen entrepreneurs who competed in the finals of the MillerCoors Urban Enterpreneurs Series Business Plan Competition last year. Pitching in front of a panel of national judges (including me) in competition with traditional for-profit entrepreneurs, Lamson and Sunni’s business plan was tight enough for them to walk away with a $25,000 grant for their venture.

The bottom line: Starting and running a viable non-profit requires the same planning, due diligence and management focus as building a viable for-profit business. (This is the beauty of social entrepreneurship, which I happen to believe is the future of all viable charities.) Yes, you do need to write and manage according to a real business plan. Yes, you do need to create a financial model, with sources of income beyond just the largesse of potential donors, and without the expectation that you won’t have any expenses because of your nonprofit status. Yes, you and your leadership team should have strong business skills, not just good hearts. (Significant personal income and wealth also helps.) Yes, you will need accounting, tax, legal and other expertise, and you need to have a viable plan to pay for it.

If you’re not prepared to launch your non-profit with the same focus and due diligence as you would if you were starting a for-profit enterprise, do both yourself and your cause a favor: Take the time, money and energy it will take to get your organization going and invest it in an existing charity focused on the same cause, by joining their organization, partnering with them, starting a local chapter of their group, or just making an outright donation. To succeed as a non-profit enterprise, you have to be more than just another charity case.