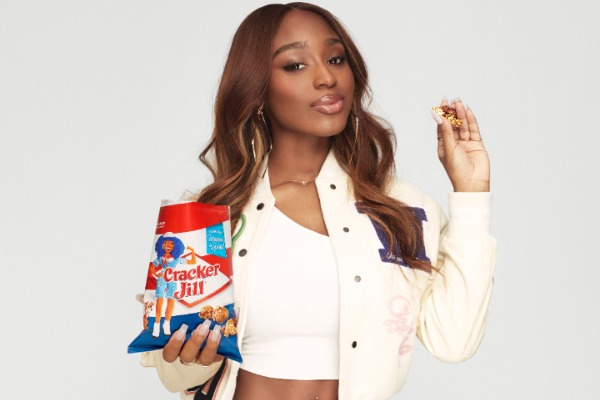 Normani put her Black Girl Magic on full display for her new partnership with Cracker Jack and its Cracker Jill program.

Speaking exclusively with BLACK ENTERPRISE, Normani shared the process for recording her reimagined rendition of the baseball classic, “Take Me Out to the Ballgame,” which introduces Cracker Jack’s new face, Cracker Jill, aimed at celebrating the tenacity and grit of women and girls in sports.

Normani touched on the importance of women in sports while also sharing her pride in serving as a mentor and role model for girls and women across the globe. Normani’s partnership with Cracker Jack celebrates the timeless snack adding a new face to its roster for the first time in over 125 years.

Cracker Jill was created by an expert in color theory and a trailblazer for Black artists, Monica Ahanonu, who brought the new character to life through a variety of strong, determined, and vibrant displays of Jills. The new faces represent five different female representations on a series of special-edition bags available at ballparks across the country and at CrackerJill.com while supplies last.

The five Jills were inspired by the top-five most represented ethnicities in the U.S., per data from the U.S. Census Bureau. The new faces also highlight the overarching Cracker Jill program and what it means for women’s representation in sports.

Normani’s involvement in the Cracker Jill campaign comes hot off the release of her single “Fair.” Speaking with BLACK ENTERPRISE, Normani teases what’s to come from her highly-anticipated debut album and the next single she’s blessing fans with for the summer.

Normani promises that Summer 2022 will be “lit,” and her new banger will be another anthem to get the girls through the summer.

Press play below for the full discussion and to find out when Normani plans to release her next single.