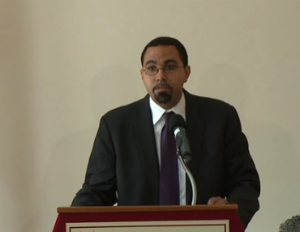 New York State Education Commissioner John B. King Jr. is calling on Americans to demand better schools and equal access to a high quality education for all children, especially those of color, and to not be silent about the issues of inequality that affect us today.

In a speech delivered on May 14 at Nelson A. Rockefeller Institute of Government in Albany, New York, King gave his remarks on the legacy of Brown v. Board of Education and questioned the audience about our community’s silence on issues that point to Brown’s promise still being unfulfilled.

RELATED: Why Common Core is Vital to Your Business

The New York State Commissioner goes on to address the disparities in funding given to students from wealthy economic backgrounds as opposed to those who come from less fortunate backgrounds.

He further elaborates on the lagging academic achievements of poor students saying, “By every single measure, whether it’s classroom grades or test scores, or high school and college graduation rates, our children of poverty and children of color are further behind and the promise of equality and the promise inherited in Brown still eludes us.”

After throwing out facts and statistics that question our silence on current inequalities in the education system, King stresses the importance of education reform and clarifies the purpose of Common Core State Standards, for which he showed his support during the Black Enterprise-Gate’s Symposium at last year’s Congressional Black Caucus event.

“Too many of the voices attacking the Common Core have done so with false narratives about the motives and intentions of education reform. This isn’t about privatization. This isn’t about a federal curriculum. This isn’t about enriching testing companies. This is about taking responsibility for the education of every single child no matter his or her race, background or economic status,” King says. “What those who resist higher standards really are saying is that some kids just aren’t going to make it and that’s acceptable.”

Watch King’s speech below to hear more about his thoughts on education reform, Common Core State Standards and the legacy of Brown v. Board of Education.

Commissioner King: Segregation and Inequality Persist from EngageNY on Vimeo.