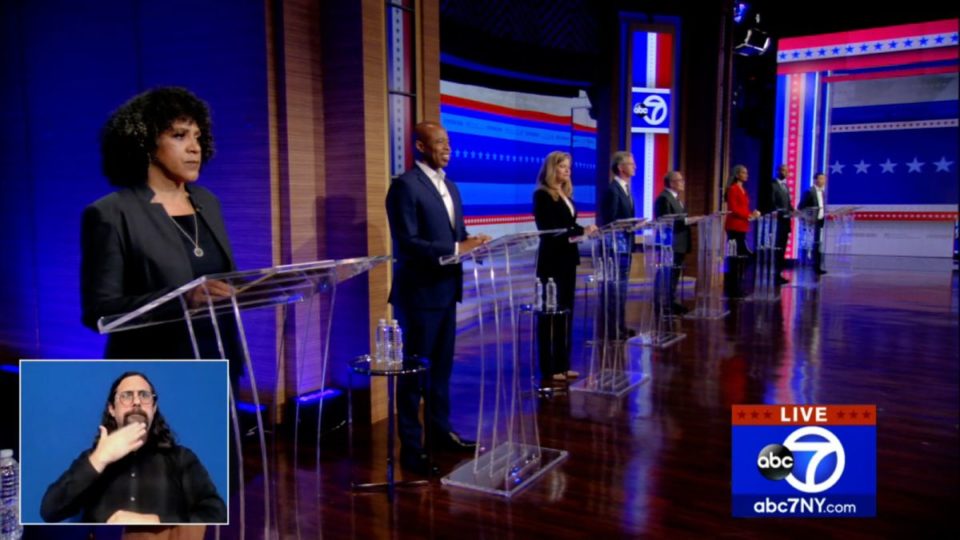 Here are a few takeaways from the second debate:

Andrew Yang spent most of the debate defending himself against attacks from the rest of the candidates. Eric Adams attacked him for leaving the city during the height of the pandemic. Shaun Donovan went after Yang for taking credit for unfulfilled accomplishments during the Obama administration.

However, it was city residents that hit Yang the hardest on Twitter after he said he wants cops in the subways 24/7 and saying the country’s largest police force needs more officers  .

“We need cops actually walking the subway cars, instead of just being stationed on the platforms, so that the passengers will know that the officers have actually gone up and down and checked out the car to make sure that everything’s OK,” Yang said Wednesday.

New York Times writer Brent Staples described Yang’s performance: “The jokiness has worn thin. He was shaken by predictable—and damaging—questions about his record.”

The Attacks Spread Across The Debate Floor All Night

Dianne Morales attacked Eric Adams for his views on policing and Maya Wiley attacked him for saying he would carry a gun as the mayor.

At one point, Adams called out Yang, saying he had no clue about the city’s issues until he began running for mayor. That led to a screaming match where they both told each other no one wants the other to be mayor before Stringer interjected that they were both right.

The attacks flew high and hard throughout the debate. Even Kathryn Garcia took some heat for unequal pay in the sanitation department while she was commissioner.

Each candidate was asked during the debate how they would grade current Mayor Bill de Blasio, who has drawn criticism on everything from affordable housing to education to policing. Most of the candidates praised de Blasio’s vision before he was elected, but not his execution.

Adams gave de Blasio two B grades for pre-K for all and decreasing stop and frisk. Garcia said de Blasio failed at the initial vaccine rollout and getting children back in school, but didn’t actually give a grade.

Shaun Donovan gave him a D and Scott Stringer gave him an F.

“While there has been a lot of promise, this is an F for me because the potential and possibilities were so great,” Stringer said.

Additionally, Yang was the only candidate who said he would seek the endorsement of de Blasio as well as embattled Governor Andrew Cuomo.

Morales, Stringer, McGuire Fight Through Their Own Issues

Several candidates were forced to comment on their own issues during the debate Wednesday.

Morales was asked about her staff defections, a sexual harassment claim and the union fight her and her staff are currently having. Morales’ responded saying once she was made aware of the issues, she dealt with them.

“The first thing that i have to tell voters is that I have been a successful manager and leader of organizations for decades and the kind of thing we’re talking about, that has transpired in this campaign is actually something that is not uncommon for managers,” Morales said. “What is most important to note here is that as soon as I became aware of the situation I intervened, I acted swiftly and the actors that were in question are no longer with the campaign.”

“First, I would say to look at those who have had decades of government experience and ask how has that done for us now?” McGuire said. “I think the experience I’ve had in managing budgets, often larger than most state budgets, in building and attracting and recruiting the best talent, in making sure that talent was held accountable. You want me here.”

Scott Stringer was asked to comment on his sexual harassment allegations and while saying that his accuser Jean Kim, a former intern, needs to be heard, he doubled down on his claims that he did nothing wrong.

There wasn’t a clear winner in the debate. Wiley and Garcia fared the best, while Yang and Adams were on the defensive most of the night. Donovan and Stringer did little to separate themselves and Morales had a hard time overcoming her campaign issues, but continued to show she was the most progressive candidate.

Also,  climate change was largely ignored during the two-hour debate, despite the fact that each candidate has it as a topic of concern on their campaign websites.

With so many candidates and ranked choice voting, it’s hard to tell who is the top candidate. Polls still have Yang, Adams, and Garcia as the frontrunners.

The Democratic primary is set for June 22.