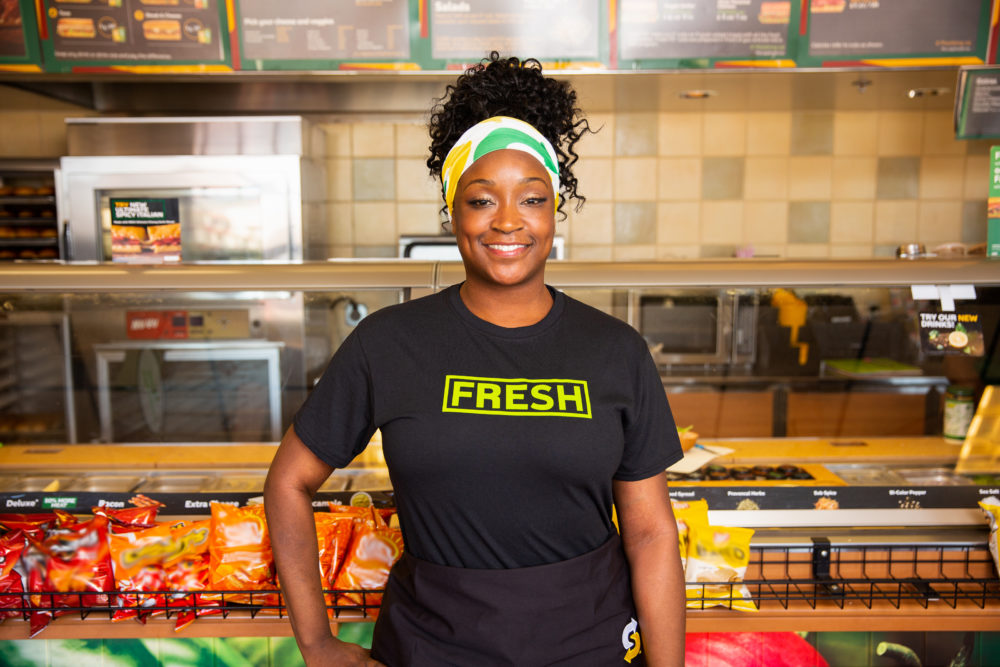 According to The 2018 State of Women-Owned Business Report commissioned by American Express, while the number of women-owned businesses grew an impressive 58% from 2007 to 2018, the number of firms owned by black women grew by a stunning 164%, nearly three times that rate. There were 2.4 million African American women-owned businesses in 2018; most owned by women ages 35-54. Black women are the only ethnic group with more business ownership than their male peers, according to the Federal Reserve Bank of Kansas. In 2017, Kiesha Haggerty, a native of Oakland, California, and 20-year veteran with the Oakland Police Department, became a member of this impressive group when she invested in her first Subway franchise.

Haggerty experienced challenging circumstances growing up. Although she became a mother at a young age, she knew she could rise above her surroundings and have the life she wanted for herself and her son. This drive led her to graduate early from high school, enroll in college, and work multiple jobs. At 19, she joined the Oakland PD.

Throughout her law enforcement career, she often ate at a local Subway restaurant. It was fast, affordable, and offered healthier than typical fast food fare. On one of her visits, she had an epiphany, “I can do this!” she thought about owning her own Subway. That same day, she went home and Googled how to become a Subway franchise owner.

She then officially started the process toward becoming an owner. “I couldn’t believe how fast it all happened,” says Haggerty. “I knew I always wanted to have my own business, but I knew nothing about how to get there.”

Franchising provides a way for people who don’t have a business or entrepreneurial background to fulfill their dream of business ownership. Subway began franchising in 1974. Today the brand is the world’s largest submarine sandwich chain with about 40,000 locations around the world.

Subway franchise owners are given extensive classroom and on-the-job training covering all aspects of the business. In addition, candidates work closely with the real estate team to determine the right location for both the business itself and the lifestyle of the owner. Haggerty’s restaurant is located in the city of Pinole – a location that is close to her home and her career.

Subway doesn’t just provide training and real estate expertise. The Subway Minority Loan Program is a program that is available to qualifying first time franchise owners. The company offers to finance a portion of the full franchise fee for up to 42 months, with interest-free payments for six months.

Since opening in 2017, things have been going well for Haggerty. “Everything was so new to me, that I didn’t really go into the business with any expectations,” she says. However, in just two years, her first restaurant has broken even, and she is now running a profitable business.

She says she learned a great deal by listening to other franchise owners in the business, as well as leaning on her Subway Business Development Agent and Field Consultant for support. These two resources provided by Subway are designed to ensure franchise owners are successful. “One of the biggest things I learned is around hiring. It’s great to hire people that have experience, but it’s more important that they understand the value of great customer service. Now I look for the it factor.”

Haggerty is proud of her successful career and business. “My business allows me to impact my community, just as my career in law enforcement does,” she says.

In addition to providing jobs for people in the community, Subway provides owners with the tools and marketing to launch fundraising programs with its Subway Cares program, designed to benefit a variety of local organizations such as schools and churches.

She has no plans to stop at just one location. “My next location will be opening next month in the city of Richmond and will feature the new Subway restaurant design,” she says. In 2017, Subway introduced a more contemporary restaurant design, featuring bold colors, a fresh produce display for peppers and cucumbers that are sliced daily, and technology features such as USB ports in the seats; among other features designed to deliver an even better guest experience.

Haggerty plans to continue working as a police officer as she opens more locations. “I have a really great team, which includes my brother. I have my full-time job during the day, and head to the restaurant afterwards to help close. I also work on the weekends. It’s really important to prioritize,” she says.

“I didn’t grow up with much, and certainly didn’t have anything left to me. This is my legacy to my son, my grandchildren and their children.”

To learn more about Kiesha Haggerty and how she’s been able to impact her community by being a Subway franchisee, check out this  video.