Obama Uses State of the Union to Reset Presidency 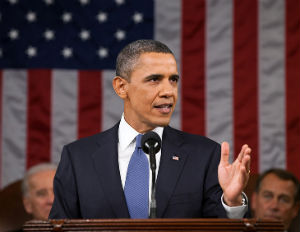 WithÂ a combination of determination and optimism, President Obama reset his presidency as he deliveredÂ his State of Union address to the nation. Although his agenda was no less ambitious, the president, who sought to transform Washington through bipartisanship and civility, declared that he will exercise executive authority, if necessary, to createÂ “new ladders of opportunity intoÂ the middle class.”

To move his policiesÂ forward and put a year of setbacks behind him, he declared that he will take unilateral action by issuing executive orders toÂ circumvent gridlock on Capitol Hill and avoid the type of partisan warfare that shut down the government last fall. In the opening minutes of his 65-minute speech, he told congressional members in the House chamber: “I am eager to work with all of you. But America does not stand still – and neither will I. So wherever and whenever I can take steps without legislation to expand opportunity for more American families, that’s what I’m going to do.”

After sharing that hisÂ policies over the past five years had placed the country on the right track – “the lowest unemployment rate in over five years…a rebounding housing market…a manufacturing sector that’s adding jobs for the first time since the 1990s… our deficits cut by more than half” – he addressed concerns of an American public that, for the most part, hasn’t felt uplifted by economic recovery.Â In fact, a recent NBC/Wall Street Journal poll revealed that 63% of Americans felt that the country was headed in the wrong direction.

During his speech, he responded to the national mood, recognizing that “even in the midst of this recovery, too many Americans are working more than ever just to get by, let alone get ahead…and too many still aren’t working at all. So our job is to reverse these trends.”

Increasing the minimum wage through executive Order to $10.10 for federal contract workers. The President will also continue to urge Congress to raise the rateÂ across the nation.

Creating “myRAâ€ as a new starter vehicle to help millionsÂ saveÂ for retirement. Obama plans to take executive action to make a simple, safe and affordableÂ retirement account available through employers and Roth IRA accounts. Like savings bonds, it would be backed by the federal government

Reviewing federal training programs to help workers gain skillsÂ for available positions. The President announced thatÂ Vice President Biden will lead the effort toÂ evaluateÂ the federal job-training system to ensure programs areÂ driven by the needs of employers and, in turn,Â enable workers to secure well-paying jobs. The administration will seek toÂ createÂ partnerships with community colleges and businesses as a means of implementation.

Fixing aÂ “broken immigration system.” The president proposes toÂ bolster border security, crack down on employers who hire undocumented workers and provide an “earned” path to citizenship for immigrants who pay a fine and taxes, learn English and pass a background check.Â The Senate has already passedÂ legislationÂ largely consistent with the administration’s plan. Next step; negotiating withÂ House leaders.

In a less antagonistic, more personalized presentation of the official GOP response than in previous years, Rep. Cathy McMorris Rodgers of Washington said the president’sÂ policies “are making people’s lives harder” and that his administration’s big government approach doesn’t work. And before Obama’s address House Speaker John Boehner rebukedÂ executive action, telling reportersÂ that “we have a Constitution. We abide by it. If he tries to ignore it, he’s going to run into a brick wall.”

The tenor ofÂ  the president’s speech was forceful but not combative as he stressed moving forward with his “year of action.” He clearly communicatedÂ that he still has muchÂ work to do and talk of the 2016 presidential election – a topic that has been occupying the focus of political pundits and prognosticators – is way premature.Â The contest that is far more pressing, however, is the 2014 mid-term elections and ObamaÂ is aware that support from Democrats will beÂ determinedÂ basedÂ on how his proposals impact their political fortunes. In fact, the president was recently criticized by the Congressional Black Caucus for the lack of African American nominees in his federal judicial selections. The GOP, on the other hand,Â will continue toÂ engage in maneuvers that will position the party toÂ keep control of the House and take over the Senate.

In foreign policy, ObamaÂ used his speech to discuss the importance of “American diplomacy backed by pressure,” especially as it relates toÂ Iran halting progress of its nuclear program: “If John F. Kennedy and Ronald Reagan could negotiate with the Soviet Union, then surely a strong and confident America can negotiate with less powerful adversaries today. ” Moreover, heÂ framed such issues as the protection of voting rights, eradication of gun violence andÂ military serviceÂ to make the point about the value of American citizenship.

The longest and loudest standing ovation came when he identified Sgt. First Class Cory Remsburg as an inspirational example ofÂ the sacrifice and tenacity needed to strengthen the nation. Remsburg had been brain damaged and partly paralyzed when he was ravaged by a roadside bombÂ inÂ Afghanistan during his 10th military deployment.

“The America we want for our kids — a rising America where honest work is plentiful and communities are strong; where prosperity is widely shared and opportunity for all lets us go as far as our dreams and toil will take us… But if we work together…if we summon what is best in us, the way Cory summoned what is best in him, with our feet planted firmly in today but our eyes cast toward tomorrow — I know it is within our reach.Â “