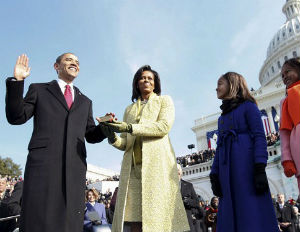 More than 1 million people filled the streets of the nation’s capital. Viewers from across the globe were glued to television sets. They all bore witness to history being made — again.

Earlier this week, on the day in which the nation honored slain civil rights leader Martin Luther King, Jr., the year that marks the 150th Anniversary of the Emancipation Proclamation and 50th Anniversary of the March on Washington, the first African American President of the United States took the oath of office for his second term.

The event confirmed Barack Obama’s place in a rare club for U.S. Presidents: Only 13 presidents in history have been re-elected to a second term and only three Democrats in the past 75 years. The ceremony’s significance was that his return to the Oval Office could not be viewed as some political fluke, rejection of an unpopular president nor a knee-jerk response to an economy in freefall as some noted in 2009. He was America’s choice – a diverse America in which African Americans, women, gays, and youth now play a larger role in national discourse, policy-making and governing. A new agenda is being set.

We witnessed a confident, self-assured Obama who spent his first term locked in partisan battles with Republican obstructionists rooting for the failure of his presidency. Despite continuous Byzantine maneuvers and blatant acts of disrespect to the man and the office, the first-term president managed to revive an economy; rescue a financial system; resurrect the auto industry; reform health care; end a bloody, unpopular war while winding down another; and deliver justice to the mastermind of the 9/11 terrorist attacks: Osama bin Laden.

So as he delivered his inaugural address to mark the beginning of his second term, Obama paid homage to the centuries-old battles for equality as he offered his sweeping vision of inclusion and opportunity.

“We, the people, declare today that the most evident of truths —- that all of us are created equal —- is the star that guides us still; just as it guided our forebears through Seneca Falls, and Selma, and Stonewall; just as it guided all those men and women, sung and unsung, who left footprints along this great Mall, to hear a preacher say that we cannot walk alone; to hear a King proclaim that our individual freedom is inextricably bound to the freedom of every soul on Earth,” he told the cheering masses.

He discussed the further development of a nation that embraces “tolerance and opportunity, human dignity and justice” while calling for the need to “harness new ideas and technology to remake our government, revamp our tax code, reform our schools, and empower our citizens with the skills they need to work harder, learn more, reach higher.” At the same time, he declaredÂ  that we must “reject the belief that America must choose between caring for the generation that built this country and investing in the generation that will build its future, ” committing to social safety net programs like Medicare, Medicaid and Social Security as well as education funding – all of which have fueled and will continue to spark intense debates among Democrats and Republicans during past and upcoming budget battles. Moreover, he spoke to the preservation ofÂ  future generations by responding to “the threat of climate change” and “that enduring security and lasting peace do not require perpetual war.”

Although details of his second term agenda will be spelled out in his Feb. 12 State of the Union address, Obama made it clear that he seeks to promote an activist government to address this myriad of concerns.