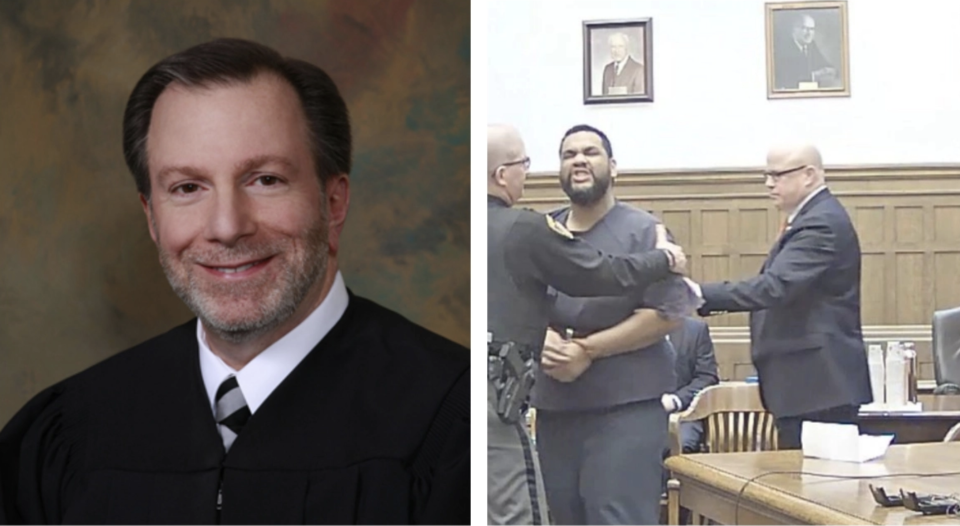 Manson Bryant has frequented Judge Eugene Lucci‘s courtroom corridors at the Lake County Court of Common Pleas since 1999 as a juvenile, according to 19 News.

Bryant has served three prison bids on four different cases. According to court documents, Judge Lucci presided over approximately eight of Bryant’s criminal cases in the past decade, including his recent infraction for the July 2018 home burglary in Painesville Township, even though he was on parole, 19 News reports.

In March 2019, Bryant was found guilty of aggravated burglary, aggravated robbery, kidnapping, and abduction, and Judge Lucci sentenced him to 22 years in prison.

Upon hearing his fate, Bryant flung expletives at the magistrate and accused Lucci of racism.

Due to his disrespectful outburst, the judge tacked on six additional years to his sentence, according to The Columbus Dispatch.

“The defendant has shown me that he has no remorse whatsoever, and therefore the court determines that maximum imprisonment is needed.”

“He poses the greatest likelihood of recidivism. I apparently thought that he was more remorseful than what he was. He was just feeding me a line of bull,” said the judge.

However, Bryant appealed his case, and the Ohio’s Supreme Court decided in a 4-3 vote to overturn the extension of Bryant’s sentence to 28 years and reinstated the judge’s original ruling of 22-years in prison.

“Because a defendant’s display of disrespect toward a trial court is not a permissible sentencing factor that the court may consider under (Ohio law), we conclude that the six-year increase in Bryant’s sentence is contrary to law,” wrote Justice Melody Stewart with the agreement of her colleague Chief Justice Maureen O’Connor.

Stewart recognizes that the job of trial court judges is arduous but cautions jurists to remain unaffected by offensive behavior and language. She writes: “even the most experienced, even-keeled, and unflappable trial-court judge is subject, every day, to stressors that may generate a range of emotions.”

“We need to start by acknowledging what is uncomfortable to acknowledge: that trial-court judges do get offended and angry, that anger clouds judgment, and that clouded judgment often results in unjust outcomes,” Stewart penned.

Justice Sharon Kennedy disagreed with Stewart’s stance and said that Judge Lucci was correct to assess if Byrant was remorseful of his crimes. Justices Pat DeWine and Pat Fischer united with Kennedy’s dissent, The Columbus Dispatch reports.